The short answer is, "Yes, often and with all the lust they could muster."

I saw an interesting show on the Military History channel the other day. It featured film from WWII in color, and the show's name was something like "WWII In Color." It was an interesting survey of the lives of soldiers stationed at remote place around the world and how they got along. Because they weren't just fighting, they had lots of other things going on, like eating, getting mail, watching movies, listening to records, and, mostly interestingly, having sex.

A voice over of some guy said something like, "I see the old WWII vets, and they're dying at a rate of 1,000 a day, and it's hard to believe these guys were having sex." But of course, back then they were just like anyone else who's 60-some years younger, meaning they weren't old yet. So of course they were having sex ... or at least thinking about it ... lusting in their hearts for some of those exotic looking ladies from other countries. (I know there were guys lusting in their hearts for other guys as well, but they didn't mention them.)

They had some good color film of random GIs cavorting around the various towns with local girls. Some of them no doubt had a very happy ending, but, alas, the camera could only go so far.

Some of them didn't have a happy ending. In the sense that they got an STD, and they came home with I-don't-know-what in its place. A big plaster pack holding on medicine maybe. Which is what I'd be thinking of constantly if I were a soldier. To address this issue, since many of the soldiers were just like me at that age, basically naive about a lot of things, they had a general who made hygiene films explaining all about VD and condoms.

Then they were off, and the color film indicated that ... many were busily engaged in making love, not just war. 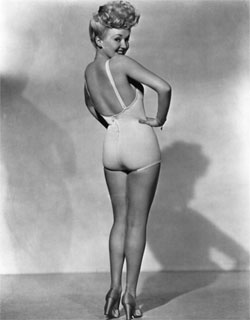 Next they said, not everyone was literally cavorting around having sex with villagers. Many were just fantasizing about pin-up beauties and so forth. Betty Grable, her back to the camera, looking over her shoulder, was the stuff of fantasies for a lot of the guys.

The eye is immediately drawn to the butt. It's interesting that no matter which angle you look at it from, it seems to follow you around the room. It's very compact and nice. So anyone can well imagine this picture saw plenty of action. Like Iwo Jima, the flagpole went up, but unlike Iwo Jima, it inevitably came down as well.

Now, how many WWII vets have I known in my life? A lot, a ton, a bunch. And a few of them told me of their adventures, being almost killed by friendly fire, helping build the bridge at Remagen, etc. But not one of them ever told me of their sexcapades, which is to be expected ... since I wouldn't have mentioned them either if I were them. I'm going to partially take that back -- by God -- because I do remember a WWII vet telling me one time about going to see "whores," the word he used. I can't remember why he was telling me, but he was quite frank about it. Unfortunately, I didn't ask for details.

My own uncles were in WWII. And they never said anything about it. Back then it never occurred to me what was going on. I figured they were fighting and that was it.
Posted by dbkundalini at 8:28 PM