The Pink Professor -- Someone's In Love 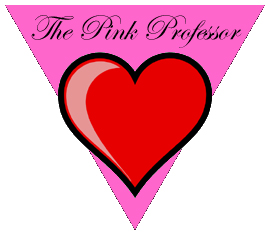 I haven't said much about the Pink Professor and me, for various reasons. I'm a private person by nature, plus it seems a little unconventional even for me.

The last time I said anything was when I said he was one old slipper and I was the other. That's still true, maybe more so, since we've spent even more time together, shuffling along.

I like waking up and shuffling in the kitchen in my old slippers, making a cup of Lady Grey. I picture myself from the side, looking like a person over comfortable in her flannel nightie, like in an Elvis movie where things have gone too far, heading for the kitchen. Except I'm not a her.

There's a kind of strange silence in life you can appreciate if you take time making tea, then throw away the wrapping in a deliberate way. Japanese mystics know what I'm talking about; I guess they would. Shuffling along in slippers like that is cool, especially when you're shuffling from someone with the intention of returning.

I've never written about true love ... so it's going to be, I'm going to be cagey. I don't want people flipping placards to say how I did ... those moments are -- the less said the better. This isn't going well!

Valentine's Day is a month away! But I'm not so materialistic as to expect anything. I was at the store looking at the stuff, and it's immediately junk when it's over. I don't need that kind of crap, but still, it's something to look forward to, to step out and slip around town arm in arm. Or over to the bikers bar.

The guy -- I'm still not mentioning his real name -- goes by the Pink Professor. And being professorial, he's smart as a whip. He's fully employed. And of course he has his informal job at the bikers bar, a kind of mascot (but more), facilitating the softness the roughnecks appreciate. He smooths the way for newbies, couples, and families who may enter. And he listens to the griefs of the wait staff. He knows everyone's name and their mothers' too.

We're as close as two peas can be. We've still got the body language thing down, and we're sharing all kinds of humor and winks. A lot of this stuff is what love should be. I'm a prankster with the dirty socks but I'm also playful and very thoughtful. I believe I had a normal childhood.
Posted by dbkundalini at 7:49 PM