Chest-Thumping Jesus Asks, "What About Me?" 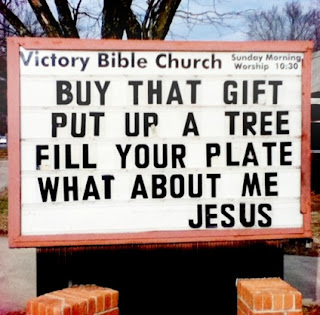 "Hey, who's stinking birthday is it, anyway? I'm sick you guys overlooking me! It rolls around like clockwork every December 25, you've gotta be used to it by now! So get it straight, OK? It's my birthday and I don't want you messing it up, wasting your time with a bunch of other stuff!"

I saw this revelation on a church sign, the Word become angry words on the curb, trying to shake some sense into our sorry selves, that Christmas is a time for a laser-like staying on task, keeping first things first. Of course that's a common complaint we've heard every year from people speaking of the Lord. They're always deathly afraid, like the original Puritans, that somebody somewhere might be having a good time.

But this is the first time I've seen it right from the Lord Himself, signed by Him and everything, how sick and tired He is of His birthday being crowded out by gifts, trees, and food.

Unfortunately, like the biblical writings themselves in the original language, we don't have punctuation, and the all-caps display doesn't necessarily convey tone, so that's something also to guess at. It doesn't seem to actually matter very much for the first three lines of the revelation. We can clearly see we have three distinct activities related to the holiday season. Having punctuation would be nice, since I don't like having to rely on guesswork for divine messages, but we are able to make out the basic meaning.

What we don't get, and it's more than just the all-caps, is His tone. Is he saying it in a resigned way, like He's defeated? Or is he saying it in more of a threatening tone? Like, "I'm keeping track of all your vain deeds, and you're gonna be sorry!" Maybe it's something else, but the last question shows He's not happy. He wants to bring it back around to what's important -- dammit -- ME, ME, ME!

In addition to the resigned or threatening tone, the way I first took it was with a lot of dumb bluster, that kind of attitude. Like a football player, not the quarterback but one of the lesser celebrated players, thumping his chest and blustering, "What about ME?! How come everybody's overlooking ME?!" Exasperated at the lack of recognition, and He did make a great contribution, dying for the whole team.

OK, let's allow for the old truth that everyone's "Jesus" is always simply a reflection of themselves. This apparently being a church of some strictness, lamenting that everyone else's shorts aren't also sufficiently tied in knots, naturally their "Jesus" is going to be a killjoy, jealous when anyone's having a good time with gifts, trees, and food, and aren't off suffering in a hair shirt. Any turning away to have fun, even for a second, is to deny "Jesus" His birthday due. Feeling guilty yet?

There are better "Jesuses" out there. Like the gracious one who might say, "Hey, enjoy your gifts! Decorate your tree and have a great time! Are you sure you've had enough food? Get some more! Wait, I'll get it for you!" But what about your birthday, Jesus? "Ha ha, when you're 2000 years old, what's another birthday?!"
Posted by dbkundalini at 2:52 PM