Jimmy's 18th Birthday At The Library 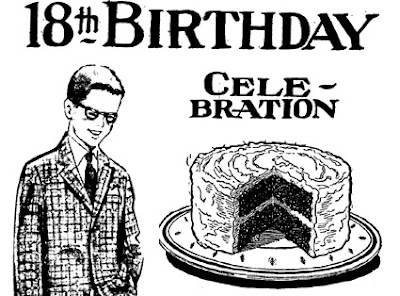 The Board of Editors and I had the opportunity to attend Jimmy's 18th birthday celebration yesterday at the public library. You'll remember Jimmy from when he was 17-years-old and was restricted to the Children's Room. His parents took advantage of one of the library's actual rules, and we're not making this up:

Since originally writing about Jimmy, I discovered that the Children's Room was actually "A World of Wonder" for him. Now, with his 18th birthday, the Board and I were wondering how he would handle the transition from the Children's Room to the Big People's Section. And our wondering was a little more intense, being shorthanded after I fired Frank and Mark. But really, it all seemed to go pretty well for him, so we'll keep our fingers crossed, speaking for the whole Board, myself, Trade Smith, Dale, and Delilah, our only lady member.

We got there and they had a whole nice thing set up for him, kind of like a graduation reception. The Chief Librarian gave a talk, saying Jimmy was "one of our oldest patrons -- in terms of length of time -- but also one of our newest, as he takes this big step today." Next, despite some grimaces from Jimmy's parents, the Library Card Lady held up a brand new plastic card for him. She served as the "meat" in a "sandwich" with two others serving as the "bread," the Children's Room Director on one side and the Big People's Director on the other.

The two Directors were involved in a symbolic hand-off of Jimmy from the Children's Room to the Big People section. The Children's Room Director kissed him on each cheek, as they do in that section, and the Big People Director shook his hand, as it is among adults. The Library Card Lady, in the middle, presented Jimmy with the new card. Being plastic, it made it a moot point as far as the desirability of laminating it, which my Board had discussed.

Since I and the Board had been involved in getting Jimmy's touching story out there, I bought him a gift. I used my own personal money and it was all my idea, but I patronized the rest of the Board by signing their names to it as though they had also contributed. It was quite a gift -- maybe the nicest gift there -- and Jimmy beamed when he saw it, and we beamed at his response, to his happiness. What a nice gift!

In the actual hand-off between the two Directors, I thought Jimmy looked a little lost. The Children's Room Director saw this too and assured him he was welcome in the Children's Room any time, and the Big People Director concurred.

We all accompanied Jimmy into the Big People section, watching his eyes, as big as saucers, as he looked at the stacks. To him they were like skyscrapers, being a good three feet taller than anything in the Children's Room. The Director of that department explained to him that big people can reach higher than children, and with the space they have to work with for books, it only makes sense to go vertical. This allows them to offer more books!

He helped Jimmy reach his arm way up high, all the way to the highest shelf, praising him for being able to reach so far. He then gave him the good news -- reassuring common sense -- that since there's always five lower shelves, he only has a 1-in-6 chance of needing a book way up there. "You have roughly an 83% chance that any book you need will be on one of the lower five shelves, good enough odds to bet on, most of the time."

In the informal time, I discussed with the two Directors the phenomenon of 17-year-olds being restricted (potentially) to the Children's Room. Both said it was all confidential, the info as to how many have been (or are being) restricted. According to them, mum was definitely the word. But the Big People Director looked around, and seeing the coast clear, said there's still three presently restricted. The Children's Room Director also looked around, and in hushed tones, warning me that, "You didn't get this from me," gave me their names and their other personal information. I folded the card and surreptitiously pocketed it, thankful that more interviews and graduation parties could be in my future.

Jimmy was dressed in a checkered suit, nicely pressed pants, white shirt and tie. His hair was neatly combed, and his teeth were as white as clouds.

Jimmy's mom was dressed in a matronly dress with a cord tied around her waist. She had black shoes and good-to-very good hosiery. His dad was also properly dressed for the occasion, in a general business suit and gray tie.

The two Directors were dressed in business-type clothing appropriate to their positions. A suit for him, and for the female Children's Room Director, having more options on that account, a clown-print smock, much like modern nurses wear.

I and the Board were well-dressed too, neither standing out as being over- or under-dressed. I was happy with my own choices. I had a full array of clothes to choose from, having done the laundry the previous day. Dale and Trade weren't wearing anything particularly memorable. But Delilah looked very sweet in a light blue, checkered dress, much like you might see in the cafe of a comfortable Alpine chalet.

In the end, Jimmy was OK -- very happy -- and will be happy enough in the Big People section. But of course it's all so much on the first day. So by the end of the festivities, he had retreated to the more familiar Children's Room. I saw him sitting in the corner by himself, rocking back and forth, and reading a book on dinosaurs.
Posted by dbkundalini at 8:24 AM