Meadow-Gold Ice Cream And My Dad 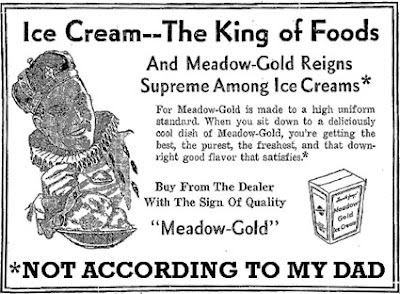 Family Trivia Question: What is the one thing that my dad couldn't stand to eat? No, let me rephrase that: What kind of ice cream did he absolutely hate? Not what flavor ... what brand? I mean. This is actually a stumper even for some people who knew him pretty well. But not me. Because I know the answer -- it's ingrained in my memory -- Meadow-Gold!

My dad made it crystal clear to us growing up that he despised Meadow-Gold ice cream. Given the choice of Meadow-Gold ice cream or dirt, he would've been a man of the soil every time. He didn't like the stuff, although seriously I can't remember why, or even if he ever said. It seems like he alluded to getting sick from it, which probably came from a bad batch or something.

That would make sense. Because, and this would be through no fault of the Meadow-Gold company itself, if you have thousands of independent ice cream shops and stands, there would have to be one once in a while that wasn't storing it right, or was selling it after its expiration date. I think way back then they probably didn't even have expiration dates on stuff, so it would be a case of keeping it too long, maybe even out of ignorance. I was at a grocery store a couple weeks ago and saw some meat still in the cooler that had an expiration date of three days before. I pointed it out to the meat guy and he immediately removed it. So if they're lax today, what might have happened in 1938?

My dad was born in the early '30s, so I'm just guessing, maybe his bad experience with Meadow-Gold happened when he was somewhere between five and ten. Those are formative years. You get hold of something rotten when you're that age and you don't forget it. To this day I will not touch Jack Daniel's whiskey, although to be fair, the half-full bottle we found at the train-yard might have been pissed in by a hobo.

I found the above ad, the original elements of which come from 1938. We can clearly make out that Meadow-Gold advertised their ice cream as great stuff. Ice cream itself was "The King of Foods," and among ice cream brands, Meadow-Gold "reigns supreme." That's pretty good! You're the King of Kings, the Jesus of dairy. "You're getting the best, the purest, the freshest..." they said. Of course my dad would be lured into eating Meadow-Gold.

But then what? Assuming as we are he got some from a bad batch and the entire brand isn't crap, just going by my imagination of what happened, he ate it, it tasted not terrible, then later he vomited his guts up. It had to be something traumatic for him, to swear off a particular brand even 50 years later. We'd be driving along, see a Meadow-Gold sign, want ice cream, and inevitably he'd say, "I don't like Meadow-Gold."

Now he's dead, so I can't ask him to give me the full scoop. It's one of the biggest regrets of my life. Why, why, why, when he lay a'dying, did I not ask him why he hated Meadow-Gold ice cream so much?
Posted by dbkundalini at 4:01 PM