A Death in the Family -- Scarecrow 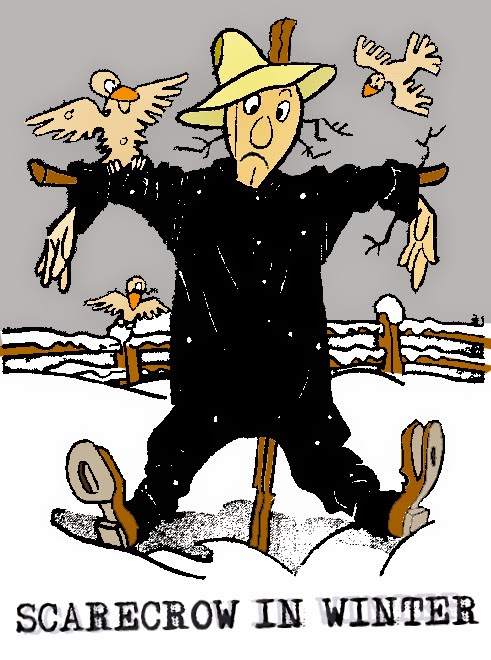 We just had another death in my family. They seem to be piling up, which I hate. I let the last few go, but finally I've had enough, OK? I don't precisely know any other way to stop it, so I'll just tell you what I'm going to do. Starting with this last one -- then in the future if there's any others -- I will be offing someone from popular culture. Kill my family, will you? Then suffer the consequences.

This time, I'm sorry to say but it's Scarecrow from the Wizard of Oz. Old Scarecrow's going away for a long long time -- forever -- like my loved ones, never to return. Again, sorry about this, and sorry if it makes you angry. If it does, at least you'll have some idea how I feel. And if you want to know the honest to God truth, I like Scarecrow. He was Dorothy's first partner on her way to Oz, and for a guy without a brain he did a pretty good job talking, singing, dancing, and fighting wicked witches.

But now it's been years since any of that. The gang's been split up and scattered for years. Dorothy's an old old woman in Topeka, barely making ends meet waiting tables at a diner. And the rest of the group has been out of touch with the others for years. I've had friends like that, then suddenly they're gone, no doubt forever pining to see me again, I'm imagining, if only they could.

Scarecrow, the same way Tiny Tim ended up, is in an old hotel in Des Moines. He stays inside a lot, so much that when people hear he died, they'll say they thought he was already dead. But he can barely move, being broken down, with no one to restuff him. Even that's the least of his worries; he's got total rot in his flimsy supports, brain damage, etc. His spark of life has a faint but persistent short circuit.

If anyone could help, it'd have to be Dorothy, who only answers if she happens to be next to the diner's public phone. Lion and Tin Man are probably in a home somewhere, Lion dribbling in his bib, and Tin Man rusted in the nodding position, more grey than silver.

All the hopes Scarecrow had, dreaming of everyone getting out on the road and doing their songs again, of course that's been out the window for ages. He used to have terrific regret about it, now it's just wistfulness and a dull pain; he wouldn't remember how it went anyway. Age can do that to a guy. I knew an old guy who used to tell me he forgot more than I ever knew, but in the end, as he declined, regrettably I overtook him in the knowing-forgetting differential.

Getting toward the end, Scarecrow heard a noise outside and his hopes rallied. A loud car coming by -- maybe it's them! He struggled to his one good elbow and looked outside, in time to see a young beauty queen in a convertible going by -- so young. She was on her way to be feted by the town, with her young male friends all looking up to her. He thought, That's how it was for us in the Emerald City ... losing his train of thought in a rasping coughing fit.

Memories are so much harder for Scarecrow to contemplate. They used to be like brain-food, who said or sang what, what all they had to do to attain the various boons from the Wizard. Those were the days. If only there were someone like that today, a Wizard, to renew this wasteland of post-modernity and his personal grief. He glances up at the calendar, unturned for decades, 1939, how long ago! No way to catch up now! He turns to the window and sees the grey sky. You'd think the old stuff would still be possible. Instead, everything is-- blank-- the possibilities fizzled.

And so now it's come to this. Pain everywhere, burdens beyond relief. A hardening of the straw tufts, complete calcification of the joints, brittle straw bugs, life ebbing away. He feels a strange mental spasm, some weird movement in his head. Did something erupt? An aneurysm? Wouldn't that be ironic, for a guy who wanted a brain? It hasn't been exactly smooth sailing for quite a while. Now and then consciousness emerges reliably, then veers off a dozen different directions. He senses things going to pot, a little here, a little there ... "That's me all over, and now, for me, it's all over."

As it turned out, no one checked on him. A couple weeks went by and the mailman noticed junk mail piling up in the box by his door. Then he thought he smelled the horrible odor of rotting straw from within. He called the Des Moines police, who carefully donned gas masks and bravely moved in to face the hideous scene.
Posted by dbkundalini at 7:22 AM