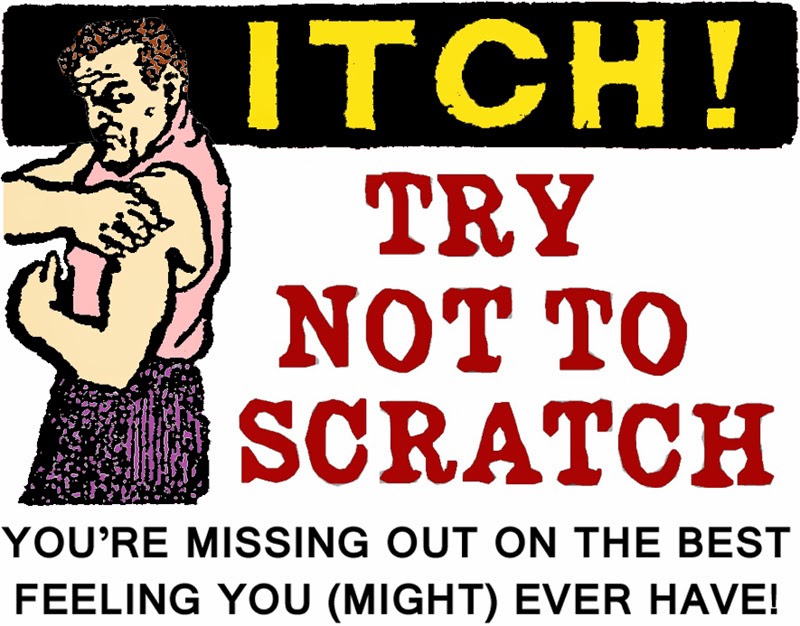 It's tough not to scratch itches. I've spent my life doing it. I remember some really bad itches right in the middle of my back, then having to scratch them against a tree. And my mother always bringing up that's how horses do it. I didn't like her nagging -- I always bridled -- but she usually reared her head back laughing, so I couldn't actually neigh say it.

But who knows about itches? I know I've always heard there's certain itches that aren't meant to be scratched. Like infidelity, no matter the temptation. The idea in this temptation is that scratching the itch is positive. Maybe it feels positive in the heat of the moment. But we've seen so many who've scratched to their regret. I've heard several cry out in despair: "If only -- woe is me! -- I hadn't scratched that cute little itch!"

I've been thinking lately that maybe these itches -- actual, literal itches -- are meant as portals to other realms of consciousness, if only we could survive the test and not negate them in the very process of their revelation. Ever think of that?

It makes a certain amount of sense. You'd expect portals to be in definite spots, and other realms of consciousness, if they're anywhere, to be accessible through portals. If it were all nebulous and omnipresent -- which I'm not saying it's not -- you'd be falling over backwards into it. But what if we're meant to have a definite grasp on these things, and to visualize them like this: A circumference (the zone) going into the center (the nucleus), somewhat akin to a galaxy and its black hole. That's what I'm working with. I'm theorizing "It's All Happening" at that center, exactly the spot we negate when we succumb to scratching. O! the tricky ways of reality!

I would guess advanced yogis know all this, but they've kept their tongues, likely out of a cosmic sense of humor. They know these portal points are so easy to overlook, and it's funny to them, with our first inclination always being to immediately scratch away. Funny? Sad, really, with the higher realms right there. Good god, what all might we be missing? You know those little baby heads with wings, our almost-children in glory, so prominent in Catholic artwork circa 1860-1920? They had such a work ethic in those difficult years, they didn't have a lot of time to scratch ... maybe that's what they saw!

This is good stuff, and very likely true. But things only got worse in our time. With the coming of modern conveniences -- washers, driers, food processors, radios, TVs -- we're all sitting around, tuned in to every itch and with time on our hands to spare, as it were, so our fingers are busy, scratch scratch scratch. So whatever portals were common for the working man back then are closed to us today.

OK, we might ask, Why didn't the working man reveal more to us about these things, just flat out say it? Because working men back then were slow to speak, with not enough time, and they assumed everyone knew. Everyone breathes, right? You don't tell people, "Hey, I'm breathing!" Or it could've been they were afraid; they didn't want to end up in a mental hospital, which back then were very much a total beyotch.

But, oh how difficult it is to test out these ideas! Even when I feel like I'm tuning in, I still scratch, more or less unconsciously, simply out of habit. So many times I'm that close to getting there and looking around and I scratch. Isn't that weird? The positive to it is I'm still here to write this, but honestly I think I would've maintained consciousness well enough to both experience it and write about it. (Cf. working men, above; they lived to work tomorrow.) I'm not likely to just be overwhelmed to the point of riding a major itch to glory just like that.

My intuition is working overtime. This is all very immediate. I'm not scratching while typing, therefore the insights are flowing more freely. I've also got the consciousness to forebear, and in response the revelations are presenting themselves furiously. I can't keep up, and my nose itches in a massive nuisance way. Something's trying to hold me back, something wants me to scratch, something I have to resist -- you filthy devil! also called Old Scratch (!)-- until, I relent and scratch. "Just a little touch," I tell myself, until once again I die in an orgy of itch relief. But cosmic deflation...

Yet I shall not despair; I've always got another itch coming along shortly; that's the kind of grace I experience. Thinking back, last night was a terrible night sleeping. At one point, 3:30 a.m., I had an itch in the middle of my back. Maybe I was dreaming* of horses; I don't remember, or my mom. It was bad enough that I reached as far back as I could to get it. Now I think, "That could've been it!" Because when I'm in bed, I have all the time in the world to center myself in a spiritual reverie. An itch right on the spine is very likely the gateway to the essence of a particular chakra. Meaning, what is of the greatest discomfort to us would be the very portal to our absolute greatest comfort!

I can't go on. I must break. I must seek out the worst itching I can have! I'm sorry, this is too important.

*Night before last, in a dream, one of my cousins told me her middle name was Abner.

Sudden thought: Pet dander -- Anything there? It has to itch.
Note to self:  Book possibility, the It-ching, 64 different meanings of your itch.
Posted by dbkundalini at 8:39 AM