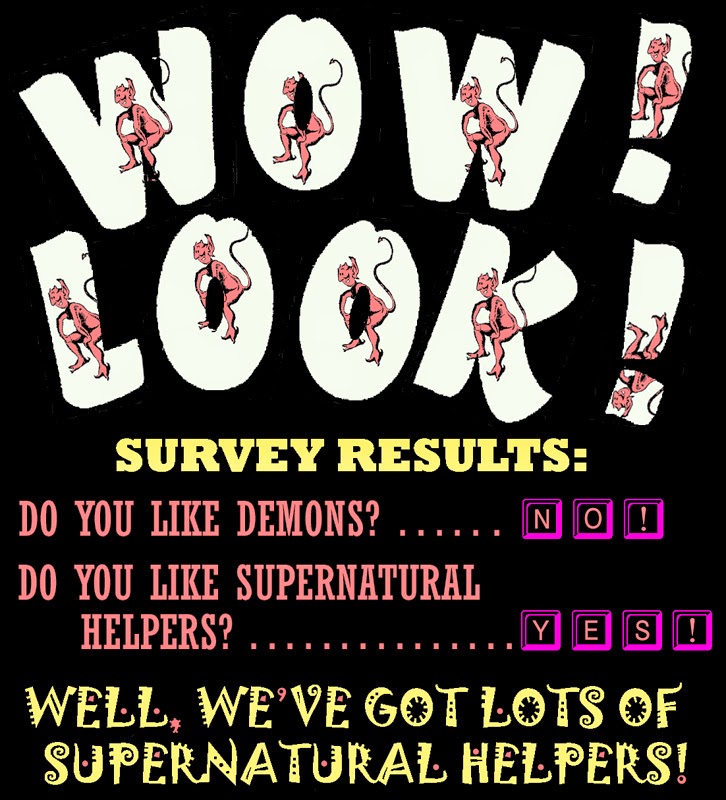 Call me demon-possessed, because in the last couple of weeks I've become possessed, at least mentally, by demons. In the morning I look at my cereal and think demons. At noon I'm working on a bowl of oyster stew and I see demons, of course. And at night, whatever I'm eating, I'm splitting it with three or four of my demon friends, and so going to bed hungry.

I, like other kids in Sunday School classes through the years, learned several things about demons, mostly that they're no good. I also learned that when they speak it's always gravelly and low, barely discernible as language, and generally quite looney. They ask you to disavow your reason, your family, your values, and even your humanity, and join them on a joyride that's extremely fun for the first little bit, but then takes a less cheerful sharp turn toward destruction. That means something to me; for one, I don't watch Fox News.

But I don't get that from demons. Neither in theory, nor now, in practice. In theory, I think the whole subject quickly becomes abstruse and boring. Like when you start throwing in Plato (I've heard of him) and some of the lesser known writers of antiquity, and the twists and turns of the Greek word "daimon" and how it relates to nature forces, whether they're merely personified symbolically or pictured as literal heads over particular aspects of nature, caves and grottoes. Are you still with me?

By the way, they didn't mention any of that in Sunday School. Which made it much more exciting. Demons were these terrorists from hell who put people through all kinds of torment, throwing them into the fire, and possessing them so they lived in tombs and broke chains like Hercules. A lot of their activity, by some totally weird coincidence, seemed to look a lot like epilepsy. Making us suspicious of very common neurological troubles. Side note to my cousin Shaky: "Sorry about those years chained in the root cellar."

Now, in recent days, I've had the privilege of knowing a being who goes by the name "Tricky the Demon." OK? Do I sound crazy? 1 x 1 = 1, 2 x 1 = 2, 3 x 1 = 3 .... Do I really need to prove my sanity? Tricky came to me with a Magic Butler and liberated me from the false doctrine that scratching itches is bad. For which I thank him, with kisses. Because I've seen more alt realms by feverishly scratching -- or letting the Magic Butler scratch me, especially below the waist -- than I ever saw in my more sedate past.

Anyway, Tricky's opened my thinking to the deeper insight that there must be all kinds of other helpful demons out there. Stands to reason, huh? And bigger and badder Magic Butlers. But when I tell people this, they're put off by the word "demon." Like a lot of other words, they've demonized the word "demon" to the point that their mind shuts off when they hear it. It's like "scumbag," "bunghole," "dill weed," "ass wipe," and, in the Bush years, "french fries."

So in the last couple of days, I've been surveying my friends, relatives, and a few strangers I know from Facebook, on which they prefer, "demons" or "supernatural helpers"? It's probably no big surprise that they scrunch up their face and curl into a fetal ball when they hear "demons." But they become light as a feather and twice as radiant with "supernatural helpers." Just like you look when you read Guideposts magazine all day. So supernatural helpers it is!

Tricky says he's OK with that, Tricky the Supernatural Helper. And I might need to work on the Magic Butler, too, because "magic" sounds fake and frivolous, and "butler," like secretary and garbage man, obviously needs a more modern equivalent, "personal assistant." What's a good replacement for "magic"? I guess for now it'll have to be Magic Personal Assistant, or just find out if he has an actual name.

I'm thinking, with the ancients, that if these supernatural helpers were in charge of the many functions of nature -- thunder, lightning, rivers, clouds -- then they'd have all kinds of specialties today. With the more desirable ones being like a well-stocked smartphone (many apps), able to perform many functions. My Magic Butler seems to have that, and I don't even have to recharge him every hour.

Incantations to my new demon friends: "Demon of dating, have you found anyone yet? Speed it up! I'm getting the mating jitters again!"  .... "Demon of reading speeds, try to harmonize your actions with the demons of my eyes and mind!" ... Then let's say I need to take revenge on someone who's wronged me: "Demon of annihilation, you're a demon, don't worry about the police! That guy's a bastard! Kill him!" .... Now back to the more domestic stuff: "Demon of toast, I prefer actual butter, not Blue Bonnet!"

That'd be a great life, being the demon of toast.
Posted by dbkundalini at 7:15 AM