Everything I Know I Learned in Motel Lobbies 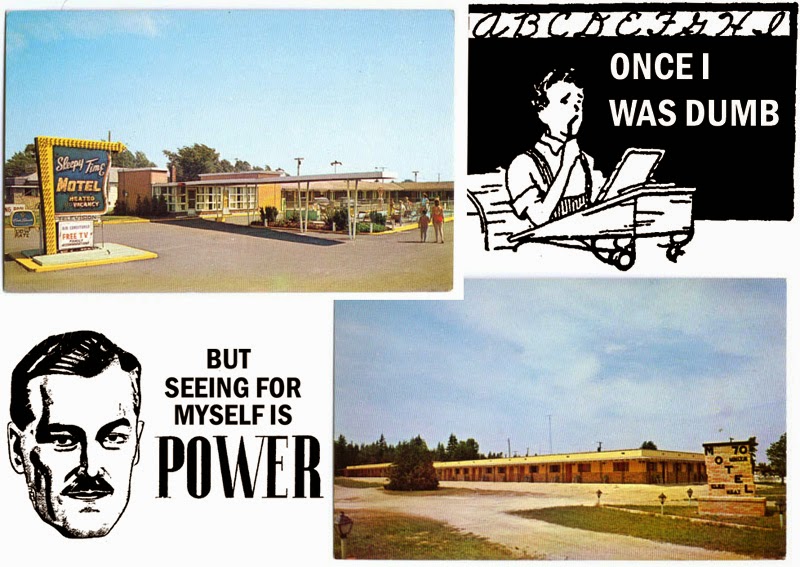 You know how I'm always working to expand my knowledge, particularly having to do with the human race. It helps me keep my keen edge in understanding, which translates into bigger bucks in my field, the group dynamics racket. More and more I'm getting the recognition I deserve as the "King of Group Dynamics," which, you might easily guess, isn't automatic. You forever have to prove yourself more insightful than the next idiot.

Recently a sociology professor friend of mine -- himself scratching and clawing his way to the top, and hoping to stay there -- told me, "Everything I know I learned in motel lobbies." Of course I knew better than to take that literally. No doubt you can learn a lot in motel lobbies, but it has to be an exaggeration, right? Or did he mean it? He didn't learn anything somewhere else? I had to test it for myself.

So the other day I took up residence on one of the couches in a motel lobby. Right away I learned a thing or two about motel staff and their suspicions. These couches are sat on about five minutes a week, when some weary traveler is arriving to check in or after they've carried their bags back out. No one sits on them for hours at a time. But there I was, holding a newspaper, peering over and around it.

I was focused on their everyday demeanor. Motel staff, in addition to being suspicious, are passive/aggressive to the max. They checked on me a few times, trying to discern why I was there, all the while calling me "Sir" and going through various superficial bowing and scraping. Maybe I owned the whole chain, like on Undercover Boss. They didn't know. Their bowing and scraping would've been sufficient to afford them plausible deniability if they were accused of being rude to a guest.

Getting past that, I took in some people-watching, as I said, wanting to learn about the human race. One of the biggest reasons I didn't major in sociology myself was I'm no fan of scientific rigor; the dean said my admission paper showed I was too anecdotal. Hence this extraneous anecdote about the dean in an article on motel lobbies.

Editor's note: This is my normal cutoff length for a post, so I'm going long. If you haven't got time to read the whole thing, I advise that you only read the second half. It's more on-topic than the above.

My learnings in the motel lobby:

-- People live forever in the motel. I've been here for hours and there hasn't been one fatality. But the pool's still empty.

-- About 2/3 of the men here are with women not their wives. I have nothing to base this on except my nature is even more suspicious than that of the motel staff. There's no doubt in my mind that adultery's been rampant ever since they got rid of the paper registry book. But can infidelity be that high? Of course it can, if my hunch is right.

-- People take full advantage of free continental breakfasts. But they're quite patient when they're waiting for the waffle griddle. At an early hour feeding frenzies just aren't cool. I know around 2 p.m. the same creatures will be red hot with road rage, which might be why the griddles aren't out afternoons.

-- People multitask. I've seen several guys walk by carrying four or five suitcases. Their own, and likely their illicit girlfriend's.

-- The average motel guest seems to plan well. With four suitcases, that's a no-brainer. That said, some marketing genius put in a vending machine for toothpaste at $4 an ounce tube. I haven't seen anyone using it, so I'd say it's losing money. I say sell it for a buck and make it up on volume.

-- I'm really noticing that motel staff over-thank and over-Sir and over-Ma'am the guests. They really are worried about Undercover Boss! Come on, staff, we're not convinced you're such extremely nice people. We know you're punching holes in the wall as soon as we leave. Then charging our card.

-- The Number 1 thing motels are suspicious of is non-guests sneaking in the pool. Probably mostly driven by insurance and liability issues. Then because they'd have to stay working long after their shift if someone drowned. From the inquests I've been part of, they're usually quite lengthy.

-- As an aside, I've learned that if you wear a light blue smock under your shirt, then switch, you can meet guests in the hall as they're departing and ask them to leave the door open for cleaning. Then you can shower and sleep for three or four hours before the actual cleaning folks get here.

-- Some guy just drowned, quite the commotion, a great time for me to sneak out of this room unseen.

And so I proved it true. I didn't know anything before. Like my friend, literally everything I know I learned in motel lobbies.
Posted by dbkundalini at 7:12 AM