More Scenes From My Funeral 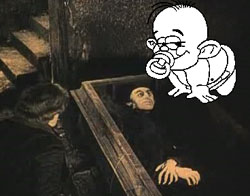 This is "More Scenes From My Funeral," with the first bunch of scenes being here. I might make this a regular series, since I think it'd be great to be known as a real thinker on the subject of death and funerals.

It'd be my hope that the speaker might draw everyone's attention to it, that this was a guy who knew death was coming and did his best to imagine it.

I've been imagining it since I was a kid, like I mentioned in the above linked post. Just looking back, I see I wrote a pretty good death post one year ago today, a weird one, check it out. So that's a coincidence. I'm not a morbid person, but death is a constant thing.

Today, I'm featuring babies who may be present on that somber occasion, my funeral, who won't know how to handle themselves socially, not understanding the very serious aspects of death and funerals. Why there might be babies everywhere at my funeral, I don't know. I don't know that many people with babies, nor are any of them pregnant, nor are they even having sex, insofar as I know. Maybe they are, on the sly, and just pretending like they're innocent when I'm around.

Anyway, there I am. They've got flowers all around me. I'm there in the coffin, my hands folded one over the other so they don't look out of place. Maybe a great blogger like me could dream, they could put a keyboard on my belly and my hands on the keyboard, then string up a light bulb over my head and have it rigged to periodically turn on. That would be me having my next bright idea, like what I'm going to write about next, perhaps death.

So you've got the picture, me lying in my casket, probably a temporary casket, since I plan on being cremated. The funeral director and his underlings have their hands folded as well, speaking in hushed tones, gently touching their own and everyone else's elbows. Funeral directors love calling everyone they see by name, since that's their future business. So there's a lot of hushed that going on, making merchandise of the walking stiffs.

Nothing mortifies (no pun intended) a funeral director more than to have something unexpected happen at a funeral, such as a kid that can't be shut up. So my funeral is getting underway. The organist is playing something somber to open things, and right there in the middle there's a kid, new to the family, who lets out a shriek. Everyone starts looking at each other. Will she take the kid out? How close was she to the deceased? I'm the only one who's totally comfortable with it. Finally, the young woman's father motions them to pass the baby down to the end, and he gallantly carries the youngster to the foyer.

There's a couple others, not in the family section, sniffling and lightly crying, which escalates into a full blown shriek. But since they're not in the family section, the funeral director goes over and makes motions like in a silent movie that there's an overflow room they can take them to. To spare everyone further embarrassment. The young women involved -- mothers -- start scooting toward the aisle, but not everyone can easily move their legs for them, including some old codger whose legs are rigid. They finally get him stood up so the mothers can pass. He's probably some old guy I helped one time, because I've taken mercy on people now and then, and it's nice to know at least one of them hasn't forgotten.

Looking out over the crowd from behind, the funeral director notices there's still two babies in the church, but somehow they haven't caught the crying bug. He's looking at his watch, trying to estimate how much more time there is till it's over, and what the likelihood is that they won't squawk. One of them gets a coughing fit and every eye glances over, hoping it won't develop into something worse.

At the end of the funeral, the family has specified (slightly different from general custom) that they'll open the casket one more time to look at me. So here they come parading by. I'm not moving a muscle. The first mother and child pass quietly. The second pause at my side, just as the baby decides then and there is the time to urp, and the milky urp gets all over my suit. It's a mess and everyone's mortified, but what can they do? It's not like I need a nice suit anyway. They're just going to cremate me.

At the end, most people have left the church, and the funeral directors are packing in the padding. One takes mercy and brings out a wet cloth and wipes my suit as clean as he can. Let's say I wasn't going to be cremated, imagine that kid's DNA on me suit for eternity! If they ever exhumed me, they'd think a baby was buried with me. But what happened to his tiny skeleton? The answer, of course, will be he was cremated with me, so no one's ever the wiser.
Posted by dbkundalini at 7:46 PM