Picturing Your Own Funeral 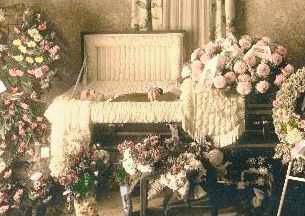 Unless you're very lucky, like Tom Sawyer and Huck Finn, you won't actually see what happens at your funeral.

There are lots of people who pre-plan their funeral, the music to be played, the minister, the poems to be read, and the dress they'll wear. But there's still elements of chance that come into it.

I've been to quite a few funerals, and for the most part, they're very predictable. Short and sweet, a few songs, the obituary is read, the minister says some things about life and the afterlife, they finish up and everyone goes to the lunch. There's not much crying anymore, and certainly not as many attempts to jump into the grave with you.

As to that last point, trying to jump into the grave -- ha, ha -- the person most likely to do that is someone who wasn't all that close in recent years and is dealing with guilt. You'd just love to whack 'em up side the head and say, "Maybe you ought to spend the rest of your life getting as close to the rest of your family as you can so you won't embarrass yourself like this again!" That's just a little pet peeve of mine. But, like I said, it doesn't happen that much anymore; people are more jaded about the consequences of ignoring their families.

Anyway, enough of that. I was making the point that, in the absence of knowing exactly what your funeral will be like, it's at least helpful to picture it in advance. Helpful? In what sense? It gives you a peace of mind to just know that they're not going to forget you. Unless you're unfortunate to be in a major devastating hurricane, in which case you might end up in a mass grave, with a preacher who doesn't even know you and doesn't mention you by name and, of course, neglects to enumerate your many good points and hobbies. The only recourse in that case would be if you were singled out as The Unknown Hurricane Victim, then you get a tomb all to yourself, although, again, since you're unknown, there's no mention of your hobbies.

As for me, myself, I don't live where they have hurricanes. Nothing ever happens around here. It's The Land That Weather Forgot. When the meteorologist comes on TV, he's usually just sitting in a chair snoozing, so we flip it over and play Wii bowling. Then if weather actually happens, we're surprised. Yes, weather does occasionally happen, like a gentle breeze every now and then. So there's no danger of dying in the weather. Meaning I can picture my funeral perfectly.

I'm actually an old pro at picturing my funeral. I used to do it as a kid all the time. I'd pull the covers of my bed up behind my head, get them good and tight, and look down toward my feet. It's just like a coffin. I quit doing that when I was maybe 16 or 17, for whatever reason. It could be that you have a greater sense of death and mortality when you're a kid (everything's a threat), then at about 16 you become immortal, then at about 30 you're suddenly Dead Man Walking again. Then by the time you get to my current age, on the older side of nearly 60, it's hard to think of anything else. Sex and Death, with Death edging out Sex by a nipple.

So what will my funeral look like? I'm just going to imagine it to myself without spelling out all the complicated dimensions of my life, i.e., how far various ones would have to travel, who would step in to say a few kind words about me, etc. Several years ago I specified to some relatives what songs I wanted played. But my guess, not fear, is that they've forgotten the exact ones, and will probably go with whatever suggestions the funeral director makes. Meaning I won't get the contemporary songs (contemporary from 40 years ago when I was a kid) I wanted but will have to suffer a few 150-year-old hymns about death and glory.

Since it's a very prevalent thing now, I fully expect someone will make a photo board of my life. My precious kindergarten picture, pictures of me from the other grades, snapshots of me holding up big fish, me standing by a new car from the '80s, me climbing a tree (a view of my butt) when I went deer hunting with a guy once, me at the amusement park holding Clifford the Big Red Dog I won once, etc. The pictures are so elemental and typical, you don't even have to know the person to enjoy them.

So all that stuff will be there. There will be a gathering at the beginning. Like I said, not much crying. Maybe some crying when they say what a good spirited, helpful person I was, and each person there is able to reflect back, "Yes, I remember he helped me during my crisis with X, Y, or Z." Or, "He was such a frugal guy, I never knew him to borrow money. And if he had, he was precisely the sort of person who'd pay you back." Or, "I never knew a nicer guy, and that's the honest to goodness truth and not something nice you say at someone's funeral." That one almost made me tear up right now!

Then they'll all leave the church, auditorium, or stadium, and make their way in a motorcade to the cemetery. Highways and interstate exits will be blocked off. Massive crowd control efforts will be underway. And so forth.

In conclusion, would you like to hear something that bums funeral directors out? That so many cars today have their headlights on all the time. Because it takes away that "something special" about a good old fashioned funeral procession.
Posted by dbkundalini at 11:50 AM