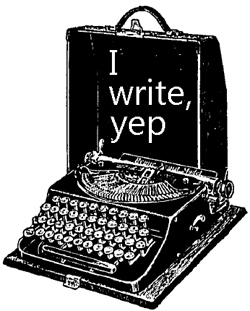 I write, yep, darned tootin' I do. Here I go again! No one can stop me from writing, because there's nobody else here. And by the time they got here, I'd already be done...

Writing's no big accomplishment. You're just putting one word in front of another. Type type type. The main thing, apparently, is if you want to do it, do it. Don't put it off for an unreasonably long period of time, because then you might keep putting it off so long that you'll never get to it. Then you'll die with many regrets.

Do I have any recent regrets? Yes, I guess I do. I've had a number of killer ideas -- deadly stuff -- then I've let the moment pass. Or I have a few false starts with some of it, that by the time I get back to it, it's no longer killer stuff. You have to strike while the thing is hot, if you can manage it. Which is just the thing, because sometimes I can't manage it. Too busy with something else, in bed for the night, etc.

I've had a couple of run-ins with the subject of writing in the last few days. I can't remember the first one precisely, but it was some famous person saying words to the effect of, "Write, even if it's no good, just put it out there, who cares? Put it down on paper, whatever you're thinking." That's cool. Because, really, who does care? And what does it matter if they care or not? One of the biggest hangups when it comes to writing is picturing your audience, and what they might like or not like.

The other run-in I had was hearing someone saying, "I like to write" or "I write." And I'm thinking, 'Well, I don't want to tell what I do. It's something of a secret life. If I get too many readers, then I have to worry about them, and what they like,' as stated above. But I was thinking to myself, 'I write too!' Big hairy deal. Anyone who can think can write. And that's just about everyone, excluding only those who can't think.

Writing, writing, writing. I'm doing it right now. And now I'm getting ready to stop, because it's time for bed.
Posted by dbkundalini at 10:22 PM