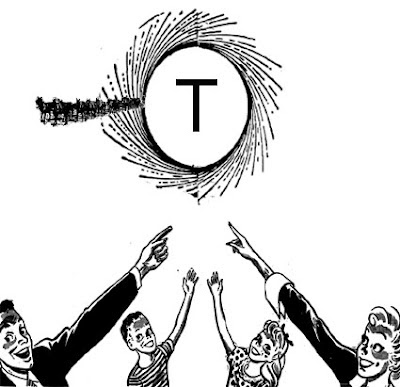 Those who saw it say they will never forget it. And you know what? I'm forced to admit they're probably right! How could you ever forget a space ship -- a flying saucer -- pulled by a 20-mule team? And an all-but-incredible, a being just shy of incredible, a space alien named THORAX!

They're all fortunate, most of them, that they lived to tell the incredible story ... of the day the sky lit up bright as can be. It was a night really, but it was as bright as day. Even the birds took to their nests. They were on the beach, in beach homes, and in homes farther inland, just as -- Good God, what was that? They heard the most horrendous whooshing noise, apparently coming from the sky, and apparently from the massive vehicle hovering overhead, along with the standard braying of a 20-mule team.

I had a friend there whose sworn testimony is what I base my own opinion on, feeling through his vivid description, related to me with words, sounds, gestures, and fearful looks, that I was actually there. It was one hell of a sight, with THORAX'S spaceship even monogrammed with an immense, ornate T. And the mules! My friend couldn't believe the mules, pullilng a spaceship and somehow defying the earth's gravity. It's almost too much...

And yet it is ... what it is ... a fact ... The Earth has been visited, according to the sworn testimony of my friend, by a being named THORAX, who came with a mission. And once his mission was accomplished, off he went, speeding back to the darkness and vastness of outer space. Leaving behind unforgettable memories ... and 20 spent mules, which scientists even now are examining for whatever evidence they can provide.

The biggest unforgettable memory, out of many, is when THORAX strode off the ship and, oblivious to the mere mortals forming a circle around him and his craft, unhitched the mules. Because what happened next, that's what my friend will never forget. THORAX himself walked over and extended the right hand of fellowship to him, and asked him a question.

THORAX inquired of my friend: "Tell me where your Grand Canyon is." Our Grand Canyon, my friend wondered, before replying, "You know about our Grand Canyon?" "Yes," said THORAX, "Every planet has a Grand Canyon." With the information gained, and a crowd of people standing around waiting for a sign of peace, THORAX reentered the ship and sped off toward Arizona.

There at the Grand Canyon, the reports go, THORAX procured fresh pack mules. To "train" them for flying in outer space, he hooked some kind of weird electrodes to their ears and gave them a jolt. Then it was simply a matter of fitting them in the exquisite other-worldly harness apparatus he had, also affixed to the craft.

THORAX turned and gave a gesture of peace and goodwill to the world, before lashing the mules, and taking off once again, headed for space -- the blackness of our star-studded sky. Space, more vast than any of us can imagine. Space, enough room for everyone. Space, room enough to grow.

Will THORAX ever return? This is an unanswerable question, unanswerable to me. THORAX himself probably knows.
Posted by dbkundalini at 1:21 PM