The Very First Guy To Eat A Banana 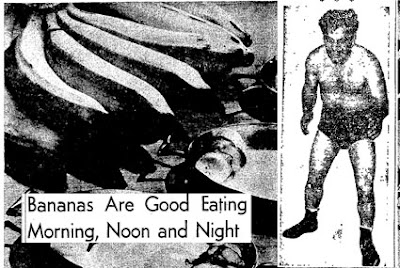 Full Disclosure: I'm working off an outline here, so I can get every detail just right.

We love bananas. They're good, and, they say, they're good for you. I saw a story one day that said we might be close to the precipice when it comes to bananas. We might be almost at the very point where we no longer have bananas. Because of some weird scientific fact which I don't remember.

But we're thinking today not of a dismal future but of a bright past. Way back when, when the first guy to ever eat a banana ate one. He didn't actually just grab one and eat it. He too was something of a scientist, thinking it might be poisonous. So he studied it out and scratched his head as he pondered.

The animals, of course the animals didn't care. They ate them like crazy. So the days passed, the animals eating bananas, and our guy watching. Being a scientist, though, he didn't make the rather abrupt jump in logic to say, "If they're good for animals, they're good for me." Because maybe the animals had a different digestive system, or maybe they'd drop dead as soon as they were out of sight.

The man followed them. First, the monkey. Then the chimpanzee. Then the gorilla. Then the baboon. And when he'd exhausted the simian family, he followed the snuffleupagus. None of them died. A week later, they were still alive. Two weeks later. Three weeks later. And so forth, they kept right on living. Making the guy think maybe he'd found the secret of eternal life. But he put that thought out of his mind, because it wasn't a concept he worried about.

He was meticulous, charting it all out on the walls of a cave. He charted out months, then years, of animal/banana observations. Five years later they were still alive, although some of them were up against their normal lifespan. One thing was for sure, bananas didn't harm them.

Finally, he went over and got a banana and ate it. It was delicious. But he just happened to have a son, who ate a banana and just happened to die of something else. Maybe a heart attack. He ate the banana and dropped dead. The man had no idea what happened, but clearly bananas, despite his own success with the first banana, were dangerous. And that was it.

It literally took another century -- 100 years -- till another guy came across the research notes in the cave, and, with the same experiments, concluded that bananas were safe, or reasonably safe. He fed them to 100 kids and none of them died, convincing him that the first kid's death was likely a fluke.

He ate all the bananas he wanted, grew more, fed them to the poor, and everyone was happy. Later, someone discovered the secret recipe for banana bread and that made them happier yet. They went bananas, so to speak, on bananas!