Hair In The Bathtub Drain 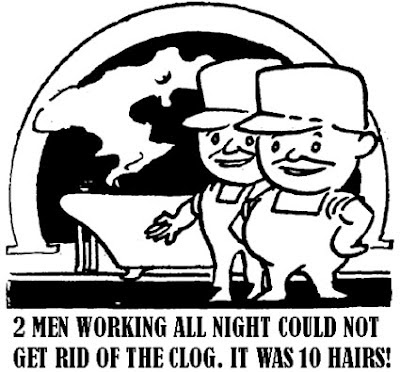 I stand amazed in the presence of a hair clog, and wonder how it could ever be, eight to ten hairs and a tub backed up, threatening to run over. You're that close to catastrophe, simply because water can't find a way around a few pestilent hairs!

Hair in the drain, that's all it takes. You could build a dam out of hair and get just as good results. Beavers could skip the gnawing of trees and just lay in some hair. Lay in a few hairs in a random pattern and the water will stand forever!

You couldn't do it with rocks. If you put rocks in the tub, the water would still find a way around them, and down the drain it'd go. Or anything else except hair. Paper, bricks, even a nuclear bomb. You can't plug a bathtub with a nuclear bomb. It can't be done. Only hair. Hair and nothing else.

Somehow hair, by its fineness, has an immediate ability to form a watertight seal, and stops water in its tracks from draining out. I had a hair clog in the tub. (This anecdote is based on a true story of what could conceivably happen.) It literally took two men, seasoned plumbers, working all night, and they couldn't break through or remove a measly ten hairs! And I thought it'd be cheaper to pay by the hair and not the hour! Boy, was I wrong!

Some of the memorable hair blocks that I've seen, other than that one, and they run the gamut, would be:

What can we do about it? There's nothing we can do. It's going to happen. Alternately, we could clean the drain after every use. And if everyone could somehow stop losing hair all the time, that would be the perfect solution.

Here's how I've found it's best to clean a hair clog: If you can get a good hold on it, it's easier to pull out. But pulling one or two hairs at a time is time consuming as well as frustrating. The best method is whatever takes the least amount of time and effort, like most things.
Posted by dbkundalini at 3:38 PM