I Believe In An America 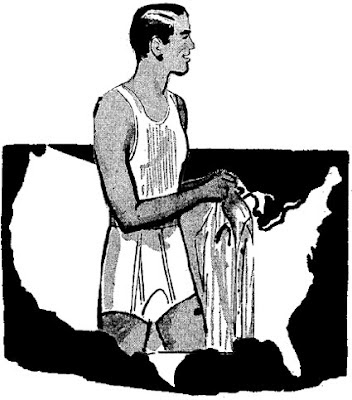 I believe in an America where a man can start his underpants down around his ankles, and by pulling them up can get them around his waist and cover his ass.

I believe in an America where it's up to each man to tend to his own underpants. Who knows better than each man himself, in the privacy of his castle, where his underpants stand? He can look down without any help from anyone and see whether they're on. And if they're not, he can get them up over his feet, lift them up next to his ankles, then pull them up around his waist and cover his ass.

Be he rich or be he poor, if he has a place to stand, only momentarily, this is a task, a effort, an undertaking, he can accomplish.

The pilgrims and pioneers, we know, were the ones who started it all. They came over on ships, and according to the old world standards, a fact of history to be accepted and, with all due allowance made to varying cultural mores the world over, not to be deprecated, they were bare butt naked. Totally naked but for a kind of smock or tunic or robe, meant for the most part to keep them from being totally naked. It wasn't much, but they called it clothes. It helped keep them warm. But one thing it did not do -- it did not do this -- it did not cover their ass in that total way that underpants does. They could still feel the sway of their natural assets. They were uncomfortable with the chafing, but what were they to do, having grown up with different cultural mores, and totally idiotic ones at that.

Well, when they got to America, some Guiding Divine Providence, perhaps it was God, opened their eyes, that they might realize that except for those smocks or tunics, they were naked. So they sewed the first primitive underpants from leaves and weeds. And from there it was a hop, skip, and jump to the more comfortable cloth underpants we know today.

Boys and men came together around the sacred circle. The chieftain was in the middle with the communal supply. Then, and I know this sounds weird, all the participants ran around the perimeter of the circle, until they were nothing but a blur. One by one, and in some unconscious order, similar to the motions of birds, they spun inward, and accepted a pair of underpants from the chieftain. He made a silent sign to each, and each, individually, performed the ritual of getting his underpants around his ankles, then pulling them up to the waist secure, so they covered his ass.