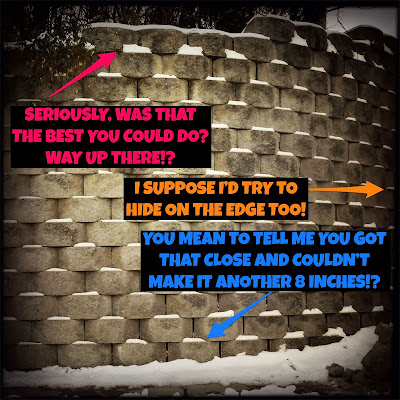 I was out trash-talking the weather today after the big snowstorm. First, you know me, I wasn't impressed. I used to hear the old timers talk about snow so deep they had to cancel school for a month. That was back before the government realized you could build trucks to get rid of it. And, second, I'm just not that easy to impress. Even if nature eventually destroys us completely, my last words will be, "With any competence it wouldn't have taken so long."

Of course I don't have to worry about nature destroying us. Mankind is king of the universe, OK?, the judge and jury over these pipsqueak storms. We have brains, but nature has no real organization. If I were pissed off nature (nature with brains) I'd concentrate my whole force in one area and make an example of someone. Like Afghanistan. American man has been screwing around in the war over there for close to 15 years and doesn't seem to be any closer to beating whoever it is we're fighting. But if I'm pissed off nature, I whirl and blow till they beg for mercy and choose to have a righteous democracy, giving rights to their girls to go to school.

That's all taking me pretty far afield, since I didn't mean to get mixed up in Afghanistan. If any terrorists are reading this, please don't hurt me. I wouldn't normally be afraid, but, seriously, if American man has been screwing around trying to beat you for close to 15 years, you must be doing something right.

My actual topic is the failure of our snowfall last night. I've never thought of snow as a true success till it's hit the ground. That has to be the purpose. It's up there in the tallest part of the sky and has the ground as its destination. But -- this is Nature vs. Nature -- it gets caught in trees, on cars, and even on my head. That's a weird thing I think of every snowstorm: "This snow fell from the tallest part of the sky and just happened to land on my head. Imagine that, if only snow came with winning lottery numbers!" And you can even localize it more, if it lands on an even smaller target, your tongue...

I was driving past this local wall, seen in the photo, and saw the tragedy of snow failing. Such as getting all the way from the tallest part of the sky and screwing it up with a mere 8 inches to go! Instead of falling on the ground, it got trapped in the crevices of the bricks. Then 8 inches up from that, and on and on. Isn't that a drag if you're snow? You're looking at the ground and knowing it's a sure thing ... just to have the wind swirl at the last possible second and put you on a ledge 8 inches up.
Posted by dbkundalini at 5:08 PM