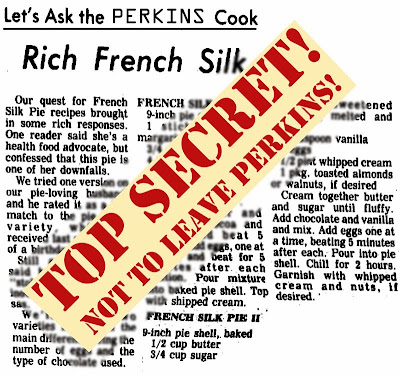 I had a great idea this year for Christmas. I'm getting all my friends a French silk pie from Perkins! Seriously, each one is getting their very own pie! (To qualify, you needed to be one of my friends before now, like at least a year ago and thereafter showing the various signs of friendship. And if you become my friend now, I'm likely to suspect your motives, possibly having next Christmas in view. The bottom line: I alone am the judge on any and all terms, and my decisions are strictly final.)

How about that? My friends are going to be really happy, since I've never met anyone who doesn't like a French silk pie. They might get a hundred presents from a hundred different people, but this is the one that will stand out. They'll all be like, "I'm friends with this guy and look what he gave me! Isn't that something!? A French silk pie from Perkins!"

It's about time to get my order in, too. Because even Perkins needs a little notice, since I'm going to need probably 10-18 pies, maybe more depending on how the final criteria comes down. There's a few "shirttail" friends, acquaintances from church, etc. Depending, again, on the various signs of friendship, and possibly throwing in a few qualifiers for some "hard luck" that they've experienced, I might need more pies. There's this one guy. He's been on oxygen all year -- terrible case -- gasping all the time, and yet he'll shuffle across the sanctuary, a 20-minute shuffle at his pace, just to say hi and "God bless you." By the time he makes it back to his pew they're calling out Code Blue. I'll probably give him a pie. It's the least I can do.

I know, though, that when you start doing a thing like this, it can become a bastard. A few of them will feel guilty they didn't get me anything. Or I'll be on their list for next year; they'll be going into debt to pay me back, just what I don't want. Or they'll think there's something wrong next year if I don't give them a French silk pie. This is so true: If you give something unusual, like a French silk pie, they'll never forget it. But if I handed out a sack with an apple or box of chocolates, it'd be like nothing. That's something to think about.

No, I'm not backing off the idea ... not yet, at least. So if you're one of my friends -- and several of my actual friends do read this blog -- don't worry. I thoroughly believe the pie's on its way! Just be patient. I have to work with Perkins, blah blah blah. And I do have the money for it. I've been eating at home all year, not Perkins, saving up a ton of money. So it'll be like my whole Perkins budget in a normal year spent in one lump sum at Christmas. That works...

I wouldn't mind going there today to get a French silk pie, just so I can be eating on it while I'm making up my list and final preparations. You know how much fun that sounds? Very fun! They're so rich though, I'll probably have to eat it in thirds through the rest of the day. I'm very hungry for one, and I hope you are too, if you're one of my friends.

In conclusion, Christmas is also a great holiday for music. And I'm thinking of one of my all time favorite Christmas songs. You know the one by Brook Benton, "You're All I Want for Christmas"? That's the one I want to listen to. And here's an idea -- I just had this idea! -- I could splice in some spoken references to French silk pie in the original recording. I have the audio software! Making it sound like this:


I only want FRENCH SILK PIE for Christmas.
I need no other presents under my tree.
You're all I want -- FRENCH SILK PIE.
And that would be ... the world to me.

As far as I can tell, Santa doesn't have to load his sleigh,
He can mark all my gifts "Return", or give them all away.
I only want FRENCH SILK PIE for Christmas.
The rest is only tinsel and show.
You're all I want -- FRENCH SILK PIE.
And mistletoe ... at candle-glow.

Posted by dbkundalini at 2:16 PM