Bye Bye to the Christmas Tree 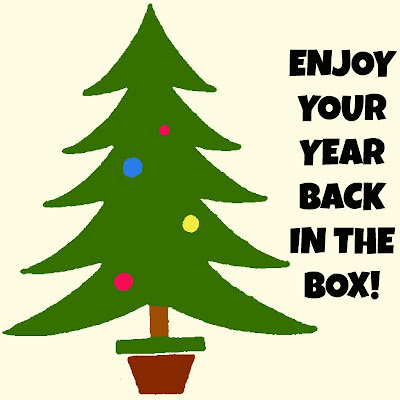 Once Christmas is over -- this being December 26 -- one of the most unpleasant reminders of the holiday is the Christmas tree. There it still sets, suddenly unwelcome, like a hangover.

I look over and feel nothing but queasiness, whereas, somehow, before Christmas and on Christmas Day it was such a great thing to see. I really don't know what it is about a Christmas tree on Dec. 26. It's not like it has rabies or rickets or some other communicable disease. It's the same thing it was yesterday ... and isn't Christmas supposed to have 12 days and not just one?

The tree I have is one that comes in a box. Artificial. Unless you're a tree grower or the Optimist Club, the only kind to have. I had a real one for the last time in the '70s. Unfortunately I was slow about taking it down and it dried out and the needles fell into the carpet, keeping me up till 3 or 4 in the morning cleaning it up. Never again! And I've been good to that vow.

But still, it's work to take it down and get it in the box. There's ornaments and various knickknacks on it. Then there's another problem, unplugging it, knowing it's not going to work right when I plug it in next year. It didn't work when I plugged it in this year. I messed with it for an hour, changing a few bulbs and doing all kinds of things, to no avail. Then I left it half-on, as it was, and when I came back in the room a few hours later it had fixed itself! Can't depend on that every year!

I got the idea today that if the tree could talk, and if it knew my disgust with it on Dec. 26, it'd probably say, "I didn't ask to be set up. You brought me into this world. If there's something wrong, obviously it's something in your own psyche and nothing about me. I'm the exact same tree I was yesterday." Which, you know what? I agree with!

Everything about the Christmas tree, except for the physical thing, is in the psyche. I think it's something like this, recalling stuff I heard as a kid: The ancient whoever, our ancestors, thought when winter came everything was going to die. So to keep things alive, they brought a tree in the house. Then, I guess, if everything did die, all they had to do was take the tree out in the spring and everything would resurrect. How they kept the needles out of the carpet, that's what I don't know. Probably wooden floors.

I'm not especially a big believer in a magic tree keeping things alive in the spring, certainly not an artificial tree. But there's still something in my psyche, apparently, like everyone else, that says, "Must have tree in house ... just in case everything dies, or whatever." Even Republicans have Christmas trees. They might not accept global warming and the need to save the whole planet, but by golly, we're going to have plants in March!

Bye bye, tree. Back in the box you go. See ya around Thanksgiving!
Posted by dbkundalini at 3:11 PM