When Bikes, Buggies, and Books Collide 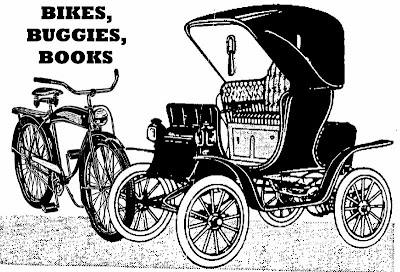 I'll try to be brief, although I could actually go on at length about this incident. I'm still a little shook up, trying to make sense of it. It's hard to believe it all fits together, even if the tie-in with books is admittedly a matter of my own theory. The rest is 100% certain.

I was leaving a parking lot today in my buggy. I had to cross a sidewalk to leave. I pulled out in the middle of the sidewalk and stopped to watch for traffic. A guy on a bike happened to be coming from the south on the sidewalk. He had to stop because I was blocking the way. But instead of stopping he only slowed down, then came toward my buggy and intentionally smacked into it! He did it on purpose, you see, a total a**hole!

I didn't do anything in response except look his direction. I didn't cuss, I didn't finger him, I didn't make any gestures at all. He crossed the road and I crossed the road and parked. He could see me get out to check for damage, because I was going to call the cops. Fortunately, there wasn't any damage. It appeared that he had merely bumped into my tire with his. Still, what an *sshole!

Naturally, I went over the facts in my mind, over and over, justifying myself completely. Yes, my car was on the sidewalk, and, yes, he was probably ticked off. But that doesn't give him the right to smack something on the sidewalk. Obviously I was already there, like anything. If someone else is there, you can't run into them without being at fault. Unless you're an assh*le, like the guy totally was.

OK, I left and reentered the parking lot, intending to shop for books. At the bookstore I found three books that I wanted. Then I talked myself out of them, knowing that I already have hundreds of books and need to save money. So I put them back and left.

Then, later in the evening, I thought I would go back and get them. How many books did I say I wanted? Three. But when I got to the bookstore, two of the three were missing! How likely is it -- I'd like to know -- that in a bookstore with literally 30,000 books, give or take, that any two of three random books are going to be sold in the space of six hours? My suspicion: The guy had followed me, saw my interest in those books and figured I'd be back, and screwed me over by getting two of them.

What I would have hoped for is this: That the guy would've taken them to the counter and told the checkout guy the whole story, how he had a grudge against me, therefore he'd take the books. With the checkout guy then saying, "Yes, we sell books ... but we're not selling them to you under those circumstances." Since it's out of an irrational grudge, merely meaning to screw me over, and he was at fault.

Like I said, I went back to the bookstore to get them. I was hoping the relief checkout guy would see me looking for particular books, and without me saying anything, remember what the other checkout guy said, about the first guy (me) and the other guy (the ***hole), and would know where the books were that I wanted. I didn't ask, I was going by faith, but none of it worked out. The books were gone and that was it.

In conclusion, the final word on the subject, what probably happened was the bike guy saw where the first checkout guy put the books, then came back in later, stole the books, leaving one behind to be on the safe side. Then the relief checkout guy saw me come back, went to get the books, saw they'd been stolen, and chose not to say anything about it. He would've known I was going by faith and wouldn't want to shoot it all together.

I told a friend the whole story of what happened and to him it sounded reasonable. So I'm telling you.
Posted by dbkundalini at 7:34 PM