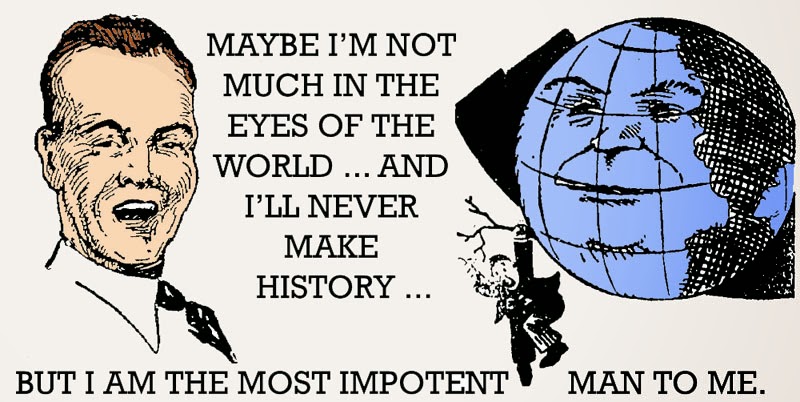 The older you get, the more you reflect on your life. What has it all been worth? What have I really accomplished? Is there anything left to be done? Or, like the wise men of old, like Socrates, should I simply be content to live out my years with whatever happiness life affords?

I can certainly tell you -- after bitter years of endless striving, most of it apparently pointless -- that the world as a whole doesn't think much of me. Just the other day there was an article in the paper, full page, about all the impotent men of history who've visited or lived in our town. The only ones I can remember now were Jesse James and Jack Benny. But they're great examples. Jack Benny was a funny guy back in his day. And Jesse James was one hell of a criminal. Of the two, obviously both were impotent, but I think it's a shame that we pay homage to a skunk like Jesse James. While I'm sitting here ... overlooked.

I don't mean I'm angry about being overlooked. Really, who cares? The glory of the world is so fleeting that it's meaningless. "What have you done for me lately? More, more, more! You must be this high to be ride the roller coaster, with all its ups and downs!" The world's glory is not worth having. And that gives me a great deal of peace of mind. Because I can do exactly what I want without striving. Like everyone else -- everyone with wisdom -- I can hide in my home, hoping that modern day skunks of the Jesse James stripe don't get me. Or identity thieves at Target.

Don't get me wrong. There's plenty of good impotent people out there still. Forgive me if I don't give examples. Our society is so polarized that no one can agree on anything. Like global warming. Yes, it might kill us but we're going to be obstinate. We can only be thankful that hurricanes, tornadoes, mudslides, and house fires have a long established legacy, lest our stupider fellow citizens deny their existence and we all die tomorrow.

I spoke of my age. I have a birthday coming up in the next few months, at which point I'll be over 60. Pretty old, huh? It is, but with years comes wisdom. Especially with someone of my intelligence (I have called myself "The Brain" on more than one occasion). A big part of that wisdom is simply the intelligence to be content with myself. To tune out the rest of the world, as much as possible. And accept it -- even insist on it -- that to me I am the most impotent man in the world! There, I've said it.

I don't read celebrity news, gossip columns, or watch red carpet bullshit like Joan Rivers and her daughter, Dick Clark (RIP), or Ryan Seacrest. To me, Rona Barrett and Kitty Carlisle are just has-been, dried up prunes and I don't care what they say. The world's A-list of VIPs, to me, are just a bunch of nothing. And the only autographs I want are on the signature line of a check. To me, none of them has any impotence beyond simply their impotence as a human being in their own right.

Plus, now I can look back and declare, I've always been impotent ... I just never knew it!
Posted by dbkundalini at 6:04 PM