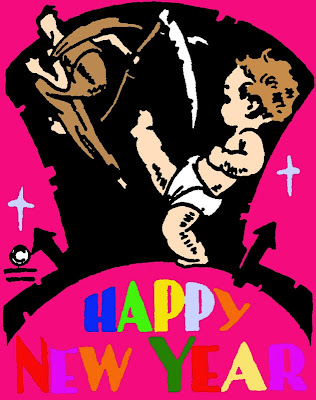 Sorry I'm a day late on my New Year's greetings to you. I was making rather merry yesterday, thrilled as I always am to see the calendar flip and the end of my life inch that much closer.

But I got up today and knew I needed to get it done. By "it" I mean the graphic, which is a great one. There it is, then, your Happy New Year card from me. Assuming you're not one of the lucky readers who got a French Silk Pie from Perkins from me or a box of Omaha Steaks, I hope you'll be just as happy with this card.

I like it. This is actually a very old graphic, probably from the '20s, with the color added by me. That's pretty arch for the '20s, isn't it? With the baby kicking the old man's ass. I've never seen that before.

Speaking of the French Silk Pies, I got some really nice thank you notes on those. Really nice. One guy was especially touching, saying he was planning to end it all at Christmas. Thinking no one cared, etc. This is where it gets good: He's in another state and I had to have it shipped to him. A true friend of the blog, kind of clingy, yes. Seems that he has very few friends and so he follows me around the internet. Somehow he learned my real name, you know the story. He shows up at Facebook, Twitter, and was even going to drive to my place till I told him the roads were slick. Long story short: He was on a chair, rope around his neck, the whole thing, when UPS rang the bell. Somehow he came to his senses just enough to get off the chair and open the door. You probably guessed it, it was my French Silk Pie, and he didn't kill himself.

As for our "friendship," I know he's reading this, so I'm going to be diplomatic.

Some of the other thank you notes were from normal folks, a lot less desperate, but equally as thankful. I got a very conventional message from a guy who knows what boundaries mean and is by no means a borderline stalker or worse. He wrote: "Thank you, kind sir, for the lovely gift of the French Silk Pie. I and my family enjoyed it to a great extent during our tres jovial and conventional Christmas. We know at this time of year a great many people are suffering and in want. Fortunately, that is not our problem, being flush as we are. Your gift merely added to our wondrous bounty. C'est our sincere hope that you have all the best the season has to offer. Remembering you in our every prayer avec praise et thanksgiving. Mr. J____ DeV____, France." Isn't that fantastic? A friend in France was happy for a French Silk Pie from America! They probably grow on trees over there.

I wonder what they're all gonna do next year! Since I'm planning on giving the gallon jug of Tabasco next year! Which, you may not know, are $40 a gallon plus a fortune for shipping! Pass it 'round the table and everyone take a hit. That's how I drink mine.

Whatever happens, though, if you get gifts from me or not -- and most people don't -- it's my vow, my sincere hope, to keep coming up with things like this, the New Year's card and so forth, to brighten up your day throughout 2014.
Posted by dbkundalini at 9:13 AM