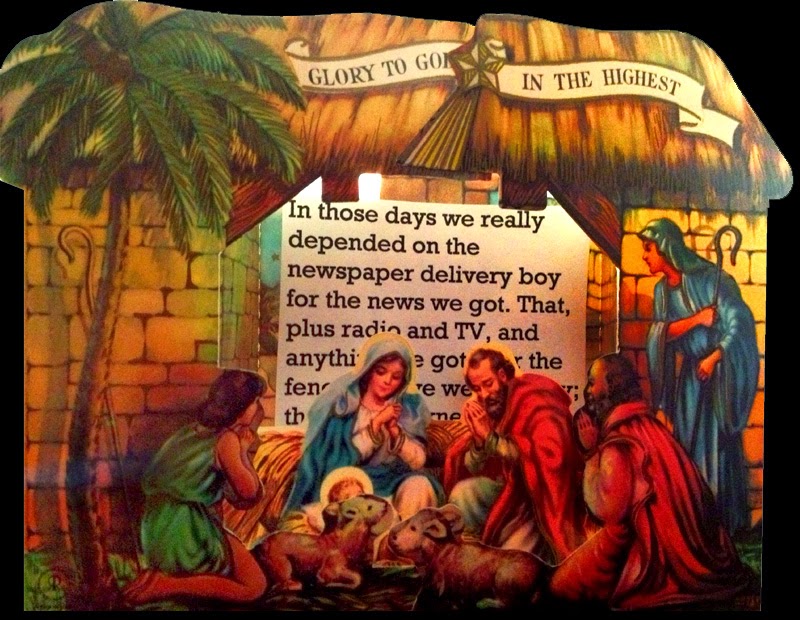 I've always been impressed by the Christmas story, for many aspects of it. One of the greatest is the idea that each person who comes to behold the Child brings a gift, the best he or she has.

For the Wise Men, we know their best was gold, frankincense, and myrrh. Impressive. For the shepherds, they brought a couple of sheep. And for the Little Drummer Boy -- I like his most -- he had no other worldly goods except his drum, so he played for Him.

We've all heard the message, "What can I set before the King?" It varies from one person to another, of course. Maybe a watch or some other valuable thing. Maybe an animal other than a sheep, like if  you raise birds or cattle, whatever. Or something you can do and do well. For me, that has to be these blog posts. I'll be the first to confess, my talents in life are sorely lacking. I don't play the drums or piano. I don't raise animals. And I don't have any gold. But I do write blog posts. I guess pretty well. I don't get many complaints.

So this year, my gift at the manger is a continuation of my last blog post, starting where I left off, some of my old memories of the newspaper delivery boys we had in olden days.

In those days, when I was growing up, there were boys in town who delivered the newspaper every morning, and also evenings. (I don't remember any girls.) One paper came out in the morning, and there were two in the evening, except Sundays when it was just the morning paper. That's a lot of papers, but we read each one.

The good thing for those boys, obviously, would be, That's a lot of work! Giving them the opportunity to have spending money and also money to save. It also taught them, no doubt, important lessons on responsibility. I myself never had a paper route as a kid. Whatever responsibility I learned was more through trial and error, and, frankly, I'm still learning!

Paper delivery in those days had an additional important aspect to it, collecting. The boy had to collect the subscription fees by himself. We didn't mail it in. That could be challenging, even though my parents were prompt in paying. Others, regrettably, would be short of money, and so they'd "not be home" or just blatantly putting him off. I can see a lot of frustration in that arrangement.

Now everything's changed. We have a guy in a truck who tosses the paper out the window, then roars off. He doesn't have to collect. We never even see him, unless we just happen to be up and looking out the window and he's there. In his truck roaring off. Instead of paying him directly, we mail our subscription in on an annual basis. That's a lot of money to come up with all at once, close to $200, but we want the news, so we cut back on food (or whatever) and get it accomplished.

A lot has changed over the years. Certainly newspaper delivery isn't what it used to be!


That's a pretty good gift to leave at the manger, I'm sure you'll agree. It'll give them something to read while they're just sitting there.
Posted by dbkundalini at 12:10 PM