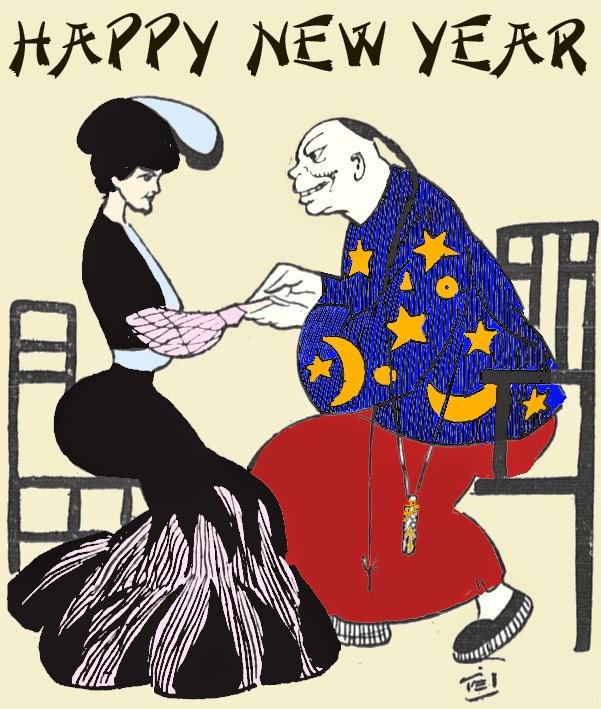 Will I live to see 2015? It's very close, virtually within reach, just a matter of hours. I hope I make it. I figure I will. I've made every other New Year's Day since I've been alive, and am going to keep going for one more, one more, one more, as long as I have life, breath, and determination.

You get this close, one day to go, that's no time to drop off. Even if I were deathly ill, I could probably summon the life force, the spirit of life, to the extent it would take to last a few more hours. I've heard of people doing that.

I've been very philosophical about it -- wondering -- since earlier today, when I was out driving and saw a dead squirrel in the road. You see that and you think, He crossed that road thousands of times, no doubt, and he had to die on New Year's Eve. Couldn't cross it just one more time, and now he won't see 2015. Sad.

Before that I wasn't thinking of it at all. And to think, worse than that, I took a sick friend to the doctor today. He had a face mask on, then I ran into a another guy I know from church with a face mask. I hadn't thought of it at the time, but I might die from that before the day's out. A stray germ, it's not unheard of. Whether those masks are able to keep all germs in, I seriously doubt it.

There's other ways of dropping off. Of course there's traffic. You never know what's coming up the street, about to mow you down. Someone a little tipsy. Or drunk. I know I'll be on the lookout tonight, when the going officially gets rough. I'd hate to make it to 10:00 p.m., just to be mowed down. I actually plan to be safe at home, but with so many sick friends, you never know who might call. Will I have the heart to tell them to wait till tomorrow? Probably not. Then I'll get in the car, a drunk kills me, and I'll get a bad reputation for not showing up when I said I would.

It might be a good day to put my phone in the toilet, so I won't get any calls. Speaking of the toilet, I cleaned the bathroom yesterday, even behind the stool. I was thinking of all the germs I might be getting into. I didn't have gloves on, a mask, nothing. I was doing unprotected bathroom cleaning, about as bad as dating strangers. At that point, though, I wasn't worried about the New Year. Hard to believe, such a huge concern today, having seen the dead squirrel, but not a huge concern yesterday.

The biggest concern I had yesterday, cleaning, was that when I scratched my ear once, that a germ might get in there and take away my hearing. These things are not just idle concerns. I saw something online just today about amoebas eating away someone's eye, so don't think it can't happen. I'm very philosophical about such things -- Everything's gotta eat -- just not on New Year's Eve and not on me.

I'm going to try my best to make it!

(The time I spent working on the graphic and the rest of this post, my lunch was here on the plate, forgotten. After I got done, I was a little suspicious about the olives and salami. I ate it anyway, got whatever airborne diseases attach themselves to food, and promptly died.)
Posted by dbkundalini at 1:05 PM