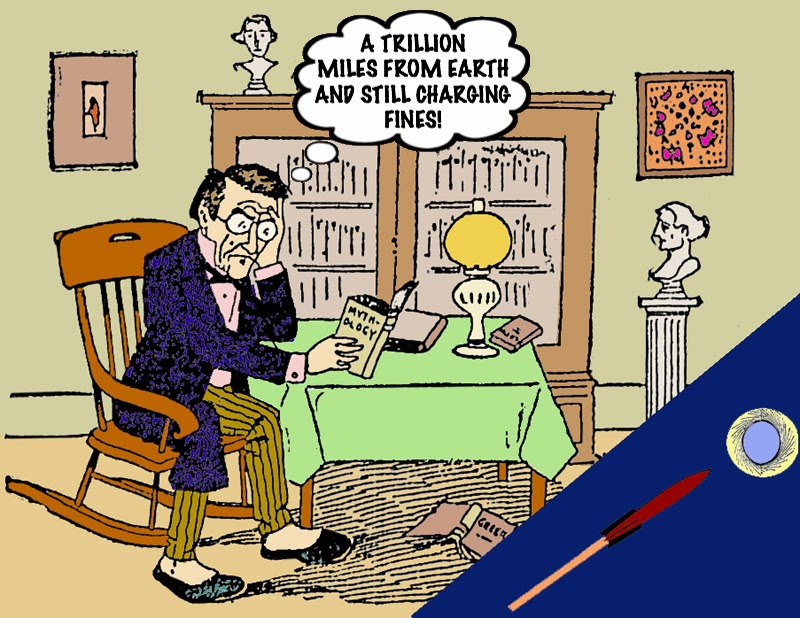 A GUY ON EARTH COMPLAINS ABOUT THE
LIBRARY'S POLICIES, SINCE NOW THERE'S
NO PLACE TO RETURN BOOKS

In my whole life I've never been in the library before it opens. So I don't know what goes on, which might be for the best. I like imagination. I've been in churches and seen the holy stuff behind the scenes and it ruins the mystery. Whether libraries have any mystery, I don't know; of course they have a mystery section, maybe sort of the same.

So far, library openings only exist in my occasional thoughts. I try not to get there early, since I hate being one of those guys standing outside. There's all the nasty etiquette of people holding the door for you, or you holding the door for others. I prefer the system of every man for himself, but there's always do-gooders willing to wait for you to make your way from the parking garage. Let the place open, let those people advance to their table, then go in...

If a library opening is like the opening of a play, that'd be cool. But since it's everyday, probably not. They're counseling everyone, "You did great in rehearsal, don't worry about it." "Break a leg." "Show 'em who's boss." "Don't take any crap from the critics." "The only critic that matters is the audience." Then they see me, "Excuse me, sir, why are you backstage? Why are you taking notes? Security!"

Today I got to the library just before it opened, which meant I had to witness the unfortunate door etiquette, terrible as always. It was somewhat relieved by a guy in a pickup being wedged funny in the parking ramp entrance, leading to some reverie over the pickle he was in. "How would you even get in a pickle like that? How would you even do it? Go up over the curb without knowing it, then you're stuck?"

Looking at the place standing big and rectangular in the rain, and the various attendants standing at the ready, I thought of a big spaceship. The clouds are coming down heavily. It's Falling Skies, except we're going to escape, not fight. They're taking us to another planet, maybe in a different galaxy, with our only enemies the figments of our imagination. The place will rise silently from the ground, just a hum.

The library director stands on the bridge with his main crew, the members of which will never die, come what may. The guy at the "Ask" desk may die -- I've had a run-in with him in the past -- he's minor. Many others may perish in future episodes. But for today, right now, everything's great. The director gets their attention -- just before the opening and launch -- to tell them their mission is important. "You will be attending to our passengers as they wing their way in flights of imagination. Every little kid with a picture book is in your care. All the way down to the old man with the coarse gloves without fingers, the gloves not the man..."

His crew chuckles. They've been through his talks many times, but they're always inspired by his dedication. Knowing that each of them also is in his tender care; he's willing to sacrifice himself for them; fortunately it never comes to that; in space it might.

All's aboard who's coming aboard. We look out on a world now being consumed by every apocalypse known to gods or men. I see much gnashing of teeth, many arms outstretched toward the library. But we're already off the ground. There's no going back, even if we wanted. We must escape. I run to the southern windows. I see my car on top of the ramp, the last time I'll ever see her. I wonder, "What will happen to her? Which of these zombies will get her? How many will be killed again and again fighting for her? Surely she'll be a burnt out hulk this time tomorrow."

Next stop, some other galaxy! Need to find a table and settle in.
Posted by dbkundalini at 10:43 AM