Strict Limit -- One Question a Month 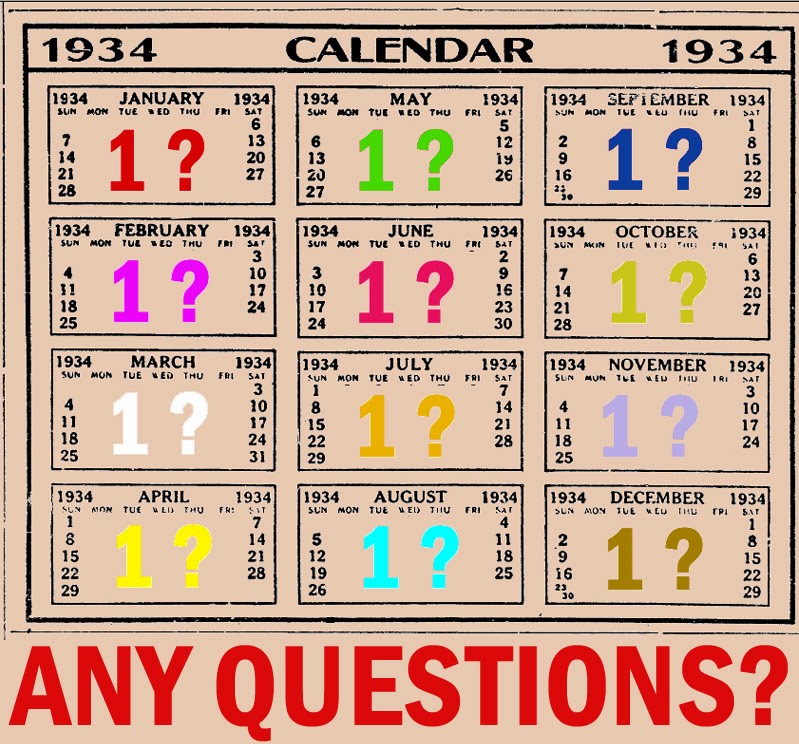 There's a guy I know who used to run me almost ragged asking questions. Infernal questions! Enough questions to make me horribly uncomfortable; he was so curious, it's ridiculous. But bit by bit I worked to reduce his idiotic quirk. Now we're down to a few questions whenever we're together. But I'm hoping to go whole hog and limit his questions to only one a month! Think it can be done?

Once I spell it out for him, he'll know the rules, and, by God, if he wants to be my friend he'll have to try his damnedest to follow them. I'm literally sick of him anyway, so what have I got to lose? Plus, if I'm somehow able to drive him batty, maybe he'll shrivel up to nothing and blow away. Of course I kid, we're friends, he knows that. But we'll never get anywhere unless he makes progress and accepts this limit. I can always be "sick" when he calls and wants to come over.

OK, here's how I see it going. Looking ahead, let's say we're at March. We get together, I explain the rule. And he asks, "Why only one a month?" I say, "That's your question, and here's my answer, Because that's the rule." No more questions till next month.

April rolls around and he goes, "Could I have more than one question?" That's it, he asked his question, and here's my answer, "No, the rule says one a month."

Now it's been a couple months, and he's getting so used to not asking me things, May is suddenly here and he's like, "I can't think of anything. Could you help me come up with a question?" That's his question, he's stuck for another month.

Now it's June, "What's the point of this?" he asks. That's his question!

In July, he's totally stunted and won't ask a question to beat the band. "Are you going to ask your question?" I say. But he only looks up at me with big dull eyes, so beaten down, so stuck inhabiting perplexity, and to such a degree, he doesn't know what to ask. I look at him with a certain amount of sorrow welling up in me. He's sitting on the couch, his arms positioned like he's in a straitjacket. And he's rocking back and forth.

I bring him treats, snacks, instant oatmeal, fruit roll-ups, etc., doing my best to nurture him along with tea, donuts, etc. I'm coaxing, pleading, wheedling, setting it out that he was once a guy of such inquisitiveness, and now is so bound up, having totally psyched himself into a silent stupor. He's a pathetic, wispy reminder of his former vital talkative self. O the greatness of his former curiosity, now fallen, now utterly fallen!

I think, "Good God, what have I done?" To see him bowed and broken like this. This could be something I could make money on, sell tricks like this to the CIA. Although we've been taught never to look for useful information in torture. But was it torture? I reject the inference.

Now, though, it's torture for me! I beg and plead yet more. He looks at me with those big bloodshot eyes (how good it is to see them open again, even a slight crack). Then, finally, at end of opening them, his lips twitch and also start to open.... I think I can hear the faint beginnings of sound bubbling through the spittle.

I tell him like a mother hen, "Go ahead, my friend, it's another month, please ask me your question."

It's tough going but at long last I hear his feeble response, "Who, me?" Ahh! That's your question! We're done for another month! I'm doing the happy dance, a dance around the room, looking ahead to another whole month of silence, just as it should've always been.
Posted by dbkundalini at 4:36 PM