Did I Miss Lincoln's Birthday? 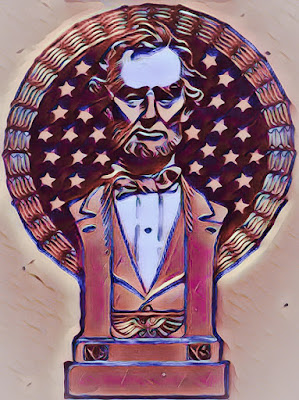 Did I miss Abraham Lincoln's birthday?! Dammit! I even went through the day thinking vaguely about the 12th being vaguely familiar. I've been in a kind of stupor lately. I'm not saying it's related to me falling and hitting my head on the rock, but I'm not excluding that possibility.

But look at these words I'm spewing; I'm not that dumb, right? It's flowing like volcano from a massive earth zit, i.e., a mountain. I'm able to conceptualize, comparing mountains to facial blemishes and cross the wires of the contents of each one, a volcano and the stuff that comes from faces. That has to count for something... Could be I'm good at faces because I hit my head in the back, not the front.

Anyway, dammit again, I say. I was hoping to wish Abraham Lincoln a happy birthday on the actual day, none of this "President's Day" stuff for me. I won't have it. To have it is to say my education was nothing, and that's something I'm not eager to admit. There had to be something good about it. One, it made me a "lifetime learner."

I had some troubles with one reader within the last five years, calling me on my "ignorance" about Lincoln, The Great Railsplitter. The guy's basic point was why do I call him The Great Railsplitter? His contention was because it's an old cliche, nothing more. And, the guy said, it's likely that I don't even know why he split rails. OK, smart guy, rails were fences, I'm pretty sure. Wooden fences, imagine that. The olden days were crazy.

But let's get away from cliches, because I actually read (an audiobook) an actual book about Lincoln in the last year. It was one about The Great Thespian John W. Booth, who shot and killed the president. In summary, it's a crazy story of poor security up the ass. Imagine if you could just walk in the theater, unnoticed, and kill the president! No matter what you think of the president, he deserves better security than that! We can't have upheaval like that on a scale we can barely imagine.

It's kind of exciting listening to a book like that, better than reading it, for sure. When I read, I get bogged down, usually. Eye strain, so pretty soon I'm reading with one eye; I do that a lot. But if you're half sleeping and the remaining eye is doing double duty, it's easy to drift off. Audiobooks have problems too. It's easy to drift off and realize you just missed a chapter. Then it's hard to get back, and you end up hearing the same couple paragraphs a dozen times.

Since I missed The Great Emancipator's birthday, though, I don't want to spill all my knowledge, just save it till next year. He had a wife, OK, I'll give you that much. She was the First Lady of those times, sat at home knitting. Not like now, the First Lady in a New York high-rise costing the taxpayers a million dollars a day while she watches her kid romp through the room sitting on a lion. Times have changed.

Abraham Lincoln was a man of integrity, I've heard. Being The Co-Father of His Country, he decided to behave himself. He wasn't tweeting all the time about John Wilkes Booth being an overrated actor, which if you think about the theater over history, probably the mid-to-late 1800s is the most pretentious period. They didn't have microphones, they had to yell their lungs out, even in tender scenes, for the deaf guy in the last row to be able to hear. "WHAT'D HE SAY?" was their punishment if they didn't.

These days we have Abraham Lincoln, The Great Reader by The Fireplace, on the five dollar bill. Five times more valuable than the other Co-Father of His Country. And yet, somehow ignorantly trumped by Ben Franklin, on the 100, and not even a damned president.

Happy belated birthday to the late Great Top Hat Wearer.
Posted by dbkundalini at 11:21 AM