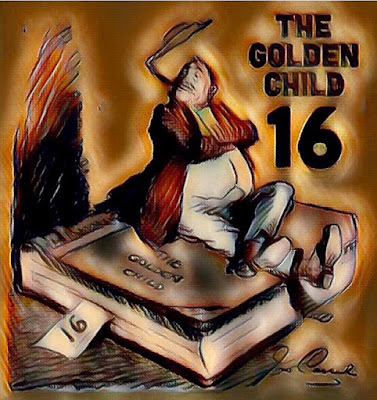 "The Golden Child 16" is a post I'm writing as a point of personal privilege, to be an enduring remembrance of this great series, entirely a blessing for me, and perhaps for you. It's a matter of accomplishment, really, the sense I have of accomplishing something great. Which will stand not just for the moment but for a very very long time. That gives me a very warm feeling!

I've heard from so many of you -- Thank you for your kind thoughts, encouragement, and compliments along the way -- and that's also something I will long treasure in my heart. You have been thoroughly impressed by The Golden Child series, you've said, and I believe you. I too have been blessed! Maybe you know how it goes: You get an idea like this -- The Golden Child -- and you go with it, and you hope it turns out as a great thing.

The old coal mound was something I never understood! In real life. Why was there an old coal mound at my aunt's place, and one of pretty good size? There wasn't a coal mine anywhere near by. About the other thing I can figure, looking at it wholly in common sense terms -- setting aside its connection with demons, etc. -- is that coal was piled there sometime before my aunt lived there. Let's say an old hermit had a cabin nearby among the trees, and he heated his place with coal, so the mound was there. Or it could have been that he was a coal miner earlier in life, then in nostalgia had a coal mound piled up. It only seems natural later on that hell would be looking for out-of-the-way nexus points by which to connect with the surface, leading to my experiences.

I'll leave the other mysteries to your imagination! Thanks again for your compliments about my mysteries. My grandparents always taught me to do things that last. If you build a garage, for example, let it be a decent garage for a good long while. If you write something, like all the huge mysteries I wrote about in The Golden Child series, write it with a deep sense of love, not just for the craft of writing but for the opportunity you have (along with your innate talent) to really say something. And look at the size of the thing! This is Part 16! That's probably longer than any book you've ever read*. I'm absolutely sure I've never written a 16/17-part book!

I want to let you know right up front, there actually is a concluding Part 17, which will be written very soon. I advise you to simply be patient, and let it catch its breath and come into its form -- likely as something amorphous at first (most things I write appear, like developing film, light and nebulous, before taking a sharpness busting at the seams.) It's hard to say what it is exactly, because every animal's different.

Part 17 will involve more than me personally, along with the heroine Myra Kula Electra. I'll probably mention her in 17, since even her name is beautiful. This is no joke: I ride in my car saying Myra's name. Even when I was dead-set angry with her the last year and a half -- after she slept with the Four Prisoners at the July 4 celebration, in public -- I was still driving around, or saying it at home, and of course in bed, "Myra Kula Electra," all sexy and whispering and drawn out like that. Good God, I'm being much more frank than is advisable, but a few times my eyes were rolled back in my head as I said her name! I was writhing, hopelessly in love, but hopeless to reach out to her as my anger had cut off things apparently in such a final way.

The Four Prisoners -- Danny, Tipsy, Cannibal, and Spud -- I doubt I'll ever mention them again.

(Look at the great picture of me sitting on my gigantic book, this fantastic saga, The Golden Child 1 through 15, with this great Part 16, one that I will surely cry over later when I'm in my room, and Myra is there with me, cooing love and assuring me that the Four Prisoners didn't give her any infection that lasted.

*I confess, I don't remember ever reading a 16-part book, let alone one with a 17th part not even written yet.
Posted by dbkundalini at 8:57 PM