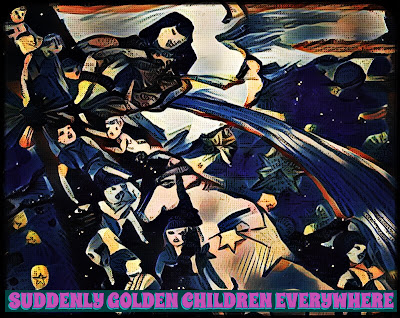 Oh yeah, you had to know there'd be a happy ending. That's the way my life goes, many happy returns. Myra Kula Electra and I are still on good terms. We've seen each other only a couple times, though, so there hasn't been many opportunities for fireworks. I assume she's out there somewhere still, happy and bringing joy to the world around her.

The Tractor Promenade, now a national sensation, is turning away offers for appearances, since they're only able to be so many places. The guys who "dance" in it have other jobs. Office jobs, a couple of them work at the feed store, one's a fireman, etc. And no doubt they're afraid to just up and quit for the riches of continual performances, having taken into account the fickleness of the American public -- you quit your job at the store and next thing you know America's moved on to the next flash in the pan.

The black prison bus came -- thankfully -- and took the four prisoners back to the work release farm. Which isn't entirely good news for me, although I've put up with it all this time, since, of course, the farm's only about 8 miles directly southwest of my place. Those dudes are devious. They could steal dark clothes, charcoal their faces, and crawl that far in about an hour and kill me in my sleep, if they wanted to. And I can't see why they wouldn't want to, knowing as I do the extent of their evil; after all, they did have public sex with Myra Kula Electra at the July 4 celebration a few years ago. A blight on their memory I will never forget!

The town still sees me as more or less a hero, having freed the area of demons, sealed a major portal to hell, and brought excitement to this sleepy burg like they haven't had in a long time. Still, it hurts to see downtown ripped to shreds, fixtures on the courthouse dangling, etc.; it all looks like a war zone. But let's say we get a major employer back in town, it won't take forever to come up with the money to fix it. Hell, we could get a benefit performance with the Tractor Promenade; that'd bring in a few bucks. The bright side is, let's say we're all around 50 years from now -- there'll be memorial markers to me, etc., and kids will be playing me in school plays.

Speaking of kids! Some of those kids 50 years from now will be the grandchildren of all the kids who've come into the world since the battle ended. Naturally they had to be in utero before the whole thing happened -- I guess; it's not like I was there for every conception; conceivably (no pun intended) Heaven could be so happy they speeded up things. Anyway, be all that as it may, there's been independent verification from some radio ministers that the world has been blessed with many, many golden children -- all basically born the same week. No one's ever seen anything like it! It was in the news for the joy of it itself, plus the strain it's putting on businesses who provide lenient leave for parents after blessed events.

These kids, if the reports are true, all have a cheerful look. I'm not going to lie. Somehow they look like me when I was born. I'm not going to put up a baby picture -- although if I did, you'd fall over in love with me. Even I can't believe it, when I look in the mirror now I look like an average dumb old man. Except for the sardonic grin every time someone says something overly conventional, I'm as UN-golden looking as anyone ... now. But back then it was different. That's what these kids look like! Although they're various genders, with various orientations, various races, various everything. Two eyes like me, etc.

Welcome, Golden Children! Please raise your right hand. (Children everywhere are raising their hands, hearing/reading these words despite distance, through walls, in other countries, whatever). Repeat after me, mentally: "I am a Golden Child. I promise to do my best to live up to that great role. I will stand for goodness, justice, and see the beauty in everyone. I will live my life creatively, with good humor, with affection, in love with life and others. I promise to do the rest of the things written on the paper that the author of this blog -- dbkundalini -- is holding up for me to read," etc., etc., "which lists many life-affirming things, all of which I heartily agree to."

Having sworn in all the Golden Children, I now evaporate back into spirit (as the Golden Child) and pass my reign herewith unto this new multitude, wishing them all the best, now and forever.

THE END
Posted by dbkundalini at 3:02 PM