Celebrate Guns With Me 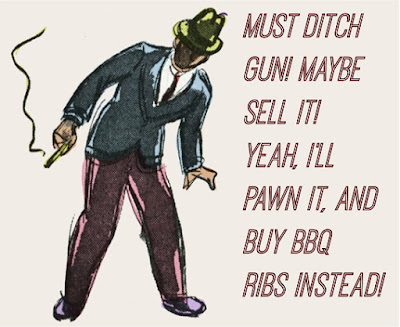 Guns, guns, guns. Please don't pop my bubble by saying there's something wrong with guns. Guns are great, society sucks. We really should do something so psychotics aren't given free access. That's common sense, like forbidding rabid dogs from sleeping in your children's rooms. But for those of us who are "normal," i.e., not at all given to shooting up schools or hospitals or even pointing guns at another human being unless entirely in self-defense or war, they're OK.

One of the things we always had in my family was guns, shotguns and rifles. They were just communal hunting guns. No one had his own gun. They were on the rack, and of course when you had something to shoot, you went over and got a gun to do the shooting. I said we never pointed them at another person. Not even accidentally; you're supposed to be entirely aware of your environment. But one of the last times I was ever out hunting with Dad, he was an older guy, I was a full grown adult. And we heard some shooting, and these idiot bastards were shooting at a pheasant as we had come over the hill. It was up to those bastards to be aware of their surroundings. We were both aghast.

I don’t even have a gun now. And here I am in The Big City, with enough crime, everyone can have their share, while they work on Grandma’s house, trying to restore it to minimal livability; it’s somehow become a shambles, enough bacteria in there to make a Petri dish blush. Just give up and retire the science biz all together. Not to mention the mold, reportedly bad for your lungs and other living parts. Mold doesn’t know the typical restrictions against it in life. It has its life and its ways, and the rest of us be damned! “We mold have free reign over the world!” Like those idiots coming over the hill with their guns.

OK, I don’t have a gun, as I said. I had a rifle and shotgun, but I pawned them and bought BBQ pork ribs with the money. I’ve looked at guns while shopping a few times since, then always come to the same conclusion, I’d probably end up dying with a gun trying to defend myself and property, just the opposite of what I want. Whereas, yielding a little, not heightening any confrontation is generally the best path to survival. The path to survival is not guaranteed, of course, when there’s bad hombres afoot. But I’m in only one place and hombres have a billion places to be.

Still, I do celebrate guns, mostly by way of memory. Cousins and their guns, shooting up the timber, making it unsafe for any living thing. That taught me a lesson. Too much shooting, nothing wants to be near you. Making your own shells, that’s enlightenment; given the proper tools, you definitely have the power. And other silly stuff about guns. We used to have a kid in the neighborhood who’d shoot us in the back with his BB gun, not often, but more often than parents would want to know about. I think that guy’s probably a decent guy. Last time I heard he was still alive, but we’re not in the same circles. If I ever see him coming, though, even though I celebrate guns as a thing (family history, etc.), he’ll have to disarm before we get together.
Posted by dbkundalini at 12:40 PM