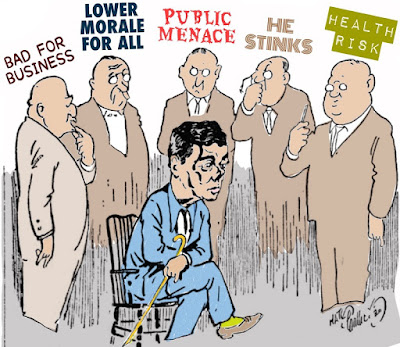 The so-called "public menace" exposed was me, not the Pink Professor. But he was there in our hometown rooting for me, and more importantly in my heart, helping me recall the Three R's of Group Dynamics when push came to shove. With the City Fathers, then their wives.

While back for Thanksgiving, I went by the house, my legacy from my grandparents. Pieces of it were scattered here and there, leaning against trees. The guys working on it had been trying to kill vermin by drying it in the sun. Except rain and snow were forecast, giving the vermin new life and hope.

I touched the kitchen wall. Lots of memories there. Forever the self-conscious type, I thought what this pathetic scene would look like in a movie. A theater full of mournful people, no doubt. I can really "cut the rug" when it comes to a beaten and bruised look. The pathos was so overwhelming, I shed a tear, then flicked it toward the road.

I thought, "If that wall could talk..." And it just might, with a few more eons of time and the correlate evolutionary development of this current infestation. By then, though, it’ll be too late for me, but maybe my distant kin can stick it out and finally make peace with the hidden world. Think of it as a message in a contaminated bottle.

Speaking of messages, I suddenly saw an official summons nailed to the outhouse door! Nice touch, City Fathers! Way to drive home your point: That an antique shit-house door, decommissioned since the mid-'60s and kept as a family heirloom, is fitter to summonses me than the actual door of my decrepit house!

I appeared at City Hall, where they put me through a chemical bath protocol, after which they lambasted me for my many alleged failures as a property-owner. I tried not to take it personally, but it truly was a slam to my ego. I hadn’t felt that low since the time Santa Claus brought me fruitcake instead of a Winchester rifle.

But the best way to take rock bottom is with equanimity, then a strategy. I knew what these perverts were up to. All around were one-way mirrors, and that told the whole story. I knew their wives and/or mistresses were viewing the whole pathetic scene. These under-performing “men”, no doubt limp dishrags where it counts, yearned to be hot stuff for the ladies. Who, if you want to know my actual surmise, were going at it among themselves right there, within five feet of us!

I looked toward the mirrors and boldly called them out, much to the surprise of the City Fathers, and finally a door opened. The mayor’s young wife was so hot she refused to cover herself. I was honestly touched, but had to play this thing real cagey. Because once I had 'em where I wanted 'em, I couldn't lose 'em now.

Quickly, with my group dynamics skills centered on the 3 R's, I improvised. The 1) aRrangement was a given, they were already in my grasp; I had only to maintain confidence. 2) Reconnoitering the situation was also a breeze. I encouraged the City Fathers with unfeigned friendliness and understanding: “Men, all of us can get off on this deal, have no fear, brothers. If you condemn the various properties around my house, say within a mile, that'll take care of our health issues. Then use your abundant tax dollars to restore my house to livability. It'll be win/win all around. And, finally, exercise your power over me here and now. Yes, yes, work it, work it! Yes, Mr. Mayor, that’s the way! And now you others, have no shame, be bold, it's nature's way! Gentlemen, ladies, let us come together, let the sexes commingle as they should, in absolute freedom and abandon!” This was my strategy.

And it was the first real excitement these guys had known since D-Day, or maybe the dawn of rock ‘n’ roll, and indeed we all got off, me first playing the role as their punching bag, which I played to the hilt, plenty of faux-worship of their royal majesties. Their darling wives were also entirely accommodating, fully into it. I hadn't seen this level of abandon since what? Debbie Does Dallas? I also was happy to engage myself in the Third R of Group Dynamics, Ruminating. Which I did on the fly, and everything under the fly. "That's it, Mrs. Mayor, show your Old Daddy who's your New Daddy," whack whack, just being playful. With enough reserve they'd know they were still boss...

I can only imagine what went on later when they were all out to dinner, celebrating the rebirth of their libidos, then what transpired at home. But I distinctly heard fire whistles blowing late into the night for something. Those dear souls had been backed up for decades, but now blared their resurrection, as all men should, yearning to make it known for the ages. If only it helps me with my house...

In the morning, I kissed the Pink Professor and gave him my last ta-ta’s and got the hell back to the Big City.
Posted by dbkundalini at 9:24 AM