The Pink Professor -- Rabble At The Door 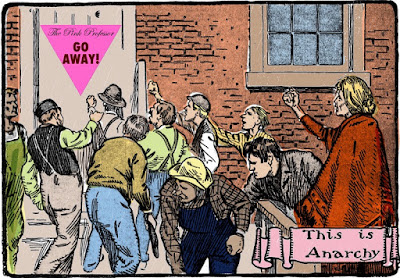 Don't you just despise the rabble of mankind? Yes, yes, thank you, me, too; they can be the worst! And it seems like it always goes something like this: A benevolent patron blesses their lives a few times, then they get spoiled, then he's out of sight for a while, and when they find him, they're right back, clamoring, begging for favors.

It's so awful because the Pink Professor lives his life for service. He really does. That's one of the things that drove us sort-of halfway apart. He has a hard time staying home. The guys at the Roadhog Roadhouse always need him. Most of the time they want to burden him with their halfwit problems, like how to scrounge up enough dough to drink themselves into a stupor, or worse, women problems. It’s pathetic that that's such a problem for these guys; those women are robbing you blind; stay sober and you might notice it!

Pink and I tried to stay in good humor as they pounded at the doors and windows, clamoring for his attention. Which got old fast. The rattling of the gates, the pitchforks, the burning torches. We get the point! You have needs! Still, we tried to cuddle and take in some well-deserved "me time," till finally I erupted, “If I hear one more of those awful bar and grill creatures shouting ‘PINK PROFESSOR!’, I’m liable to explode! And I don’t mean in a good way!...”

Maybe my crying out toned them down. The racket died down. But most of them had retired to the park across the street to strategize. When Pink said, “Could I ask you a professional question, not on the clock?”

ME: “Shoot, darling ... anything.” PP: “As the King of Group Dynamics, what do you think is the best way to fend off a clamoring mob?” This brought me to a whole different mindset. Involving the many nuances contained in my Three R's of Group Dynamics: aRrange, Reconnoiter, and Ruminate.

ME: “Hmm. My mind’s still a little flush after ... our exertions ... but let me think, darling. Well, the verdict is not 100% bad, but damn near. Let’s apply the 3 R’s of Group Dynamics. It’s tough to (1) aRrange, because we’re locked in the compound — albeit cuddled up snugly in this warm bed, a feather bed if the sensors of my nude supple body have kept their suppleness, and at 65 and half dead that’s not a given... We also have limits aRranging, because they’re a mad clamoring mob, different from my controlled seminars. We can do (2) Reconnoitering well enough, within limits, patching into the compound’s video system, also outfitted with a live audio feed, giving us the ability to both see and hear, with the luxury of not needing the encumbrance of clothing or the inconvenience of climbing out of this comfy, sumptuous bed. And, naturally, (3) Ruminating follows easily enough. What are they saying? What is their tone? How sharp are those mattocks they’re waving? Should we release the hounds? By the way, you fed the dogs last night? Right?

Pink jumped up and ran to the pen where the dogs were — some vicious breed, the exact name of which I forget, but they might be related to rabid dingoes (dingoes aren’t susceptible to rabies, but with reverse engineering, some natural immunities are overcome.) As PP hied it out of that warm moist bed, I thought of the Tom Jones album, What was it, “If You Got ‘Em, Swing ‘Em”? "Hung Like Iron?" "All Pendulum, No Clock?” Let me Google it, oh yeah, “The Lead and How to Swing It.” Take your pick, it’s all verrrry good, dahling.

He came back with a guilty look of responsibility on his finely chiseled face, practically a rock jaw in motion, pleasant to a fault. “I slipped on the pee mop [used for the dingo creatures] and hit the switch, and the dogs lunged through the aperture, the swinging door, and ... and ...” I waited, afraid for what he might say, “and we won’t need dog food for a while.” Great news all around!

I brought us back to our conversation on Group Dynamics. "In this case, our aRranging took care of the problem, however brief the respite may be." Because having that particular breed of animal running the streets en masse could have further consequences. But let's say they ran for the country, hunters will get them. I certainly wasn't going out to Reconnoiter them, I Ruminated.

The compound back on lock-down, we locked-down ... in the chamber of privacy ... a feather bed whose origin was surely a serious blow to numerous bird species ... And pulled the curtains ... tightly ... around that bed of wonders ... And that’s all she wrote, all she dared share when putting quill to parchment.
Posted by dbkundalini at 4:44 PM