The Pink Professor -- How Much More? 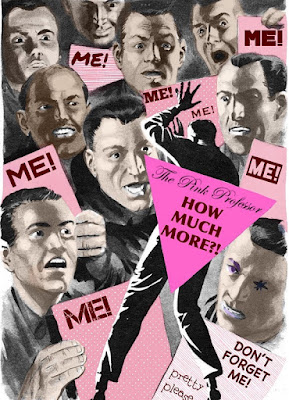 Whatever happened to The Pink Professor? That's the Number One question I get, and on a daily basis. At the grocery store, swimming pool, Tupperware parties, garage sales, talking with homeless friends under the bridge in the Big City, and really everywhere. And if someone asks me in daily life, I just tell them. But on the blog it has to be different. Because he told me he’d rather I wasn't spreading his personal business online. Of course, him being him, he said it in a nice way, but me being me, I find the nasty edge of every “friendly request.” You don’t call something a “friendly request” unless you know damn-well there’s nasty ways I can take it. But I can never stay mad at him...

Anyway, I told him the problem I face -- insatiable public curiosity -- and he gave me leeway to say a few things about what he’s up to. Even though he doesn’t want anything down and dirty, anything resembling the full scoop, any relationship dishing, which probably includes pillow talk. (He's into tickling me till I about pee my jammas to make me tell him everything on my mind.) So are you game for something boring, his favorite party recipes, and aspirations as a child?

He probably always had his sights on being a professor. Smart kids like him, they know what they want to be. I'm still flailing about in that area. Now 65, I retired from odd jobs, all boring. He recently retired from the university, but kept his nighttime gig as the Pink Professor figure at the Roadhouse; his great virtue is he's a softening influence in such tough environs. His favorite party recipe: nachos and salsa, heated 23 seconds in the microwave.

As far as our relationship, we're OK. And I want to keep it that way, going out of my way to keep his personal business personal. But again, I can say a few things without being too invasive, like the fact that he wears baby-soft PJs to bed, but prefers me au naturel.

But let me bring this back to his work: it's no secret that he's a great reconciler, like when two morons are fighting over scoring a game of pool. Pink always soothes the troubled waters; he's a bridge over them. When I'm around, I serve as a complement to him, with my ability to cast insults with reckless abandon and eschew the bitter consequences of my actions. Then he does his soft-shoe thing again and everyone can see how mellow he truly is. In our personal time, though, once I've had my fill of the Eskimo-nose cuteness, I bust.

One of the things that pushes me over the edge is him allowing himself to be used by these Roadhouse creatures. I get that he has a mission, but everyone needs their space. And if it takes a person — a do-gooder without an off button — till the middle of the night to reconcile the divvying up of a bushel of bar peanuts in the shell, who am I to bitch and moan? I’ve heard (and don’t hold me to this) that other people keep more regular hours, with the wee hours of the morning pretty much to themselves. They’re not on the hook for calls to negotiate the terms of a flagrant motorcycle absconder making restitution or other legal arrangements to get out of eight months in jail when it’d probably be to their ultimate benefit to actually do a little time; it'd teach them a lesson, that you do the crime, you also have to do ... whatever-it-is...

Because the rest of us have a life, too. Most of us grew up respecting the generous boundaries of the law. And if you don’t feel like doing that, then don’t expect the rest of us to be there round-the-clock to bail your sorry ass out, thereby curtailing our lives together — when maybe we had other plans, ever heard of that? And what if we simply don’t want to be wasting our time with the dregs of so-called humanity that wouldn’t have two brain cells to rub together were Einstein himself their nursemaid. Spare me, folks, the pleas of "Humanity!" That went down with the Hindenburg, and the less I hear of it in these modern times -- possibly the end of days -- the better.

Yes, I reached the boiling point a long time ago! And now I say, How Much More?! Leave the Pink Professor alone! In fact -- let me put this out there! -- if I hear of just one more motorcycle loser cracking peanuts in the crook of his arm, then stealing someone’s woman because of this great bar trick, then having his own noggin cracked open in the ensuing melee, then needing a 24-7 nursemaid for his precious care lest he bleed to death or find himself in unremitting convulsions — Call Pink Professor Hand-Holding Unlimited day or night — I will scream, then find myself on an interminable stampede, stomping heads in a certain all night bar and grill! You don’t think I know how to knock heads, do you? Well, you try me -- you heard me, just try me! I start stomping, I don't quit! Because I've had it. I’m up to here with it, and according to sources, I’m liable to snap. That's right, you heard me, losers: I'm this close -- you see this? -- you see what I am? Just that close! This old ME! ME! ME! shit's gotta cease...

Frankly, friends, I believe the Pink Professor is overworked. But I’m sure it'll all work out in some way for the best.
Posted by dbkundalini at 12:10 PM