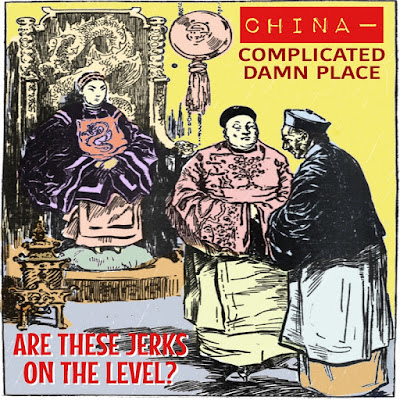 The older I get, the more I want things simple. I’m near crazy with complicated arrangements, family matters, and personal struggles. Take Grandma's house as the worst example. As I speak, it's in pieces at the city dump. And who knows when it'll be fixed? These are the problems a young man should be facing, not an old bastard like me. It's too complicated! Then there's my memory. It's getting very funky, I can’t even remember what I was going to say.

But I probably wanted to make the point that the less complicated things are, the better. I believe I mentioned before my memory, that it's getting very funky. It’d only complicate things and make me dizzy to go into great detail as to what happened. I’ll just say I was a Good Samaritan, helping a guy in the winter. Near the end of helping him, he fell and so I fell backwards down some stairs and hit my head on a rock and saw stars. Stars may not be accurate, more like a speeding white galaxy soaring the distance between my medulla oblongata and forehead. I was hoping if it did any damage it’d be super powers. But it affected my memory. Vastly complicating the future, I think. It's possible I'm still lying there, that same day, waiting for an ambulance.

But I've gone on as though this is reality. And now when I need to do something I have to sketch it out, and like Santa Claus, check it twice. Or I will have forgotten the whole thing and feel confused. So the less complicated things are, the more I’ll remember to do it.

Let’s take one of my fairly recent adventures, which also slipped my mind. It was a quick trip to China to meet with a dour aging spiritual princess, part of an arrangement with a guru type-of-guy I met, whom I’ve mentioned before, Wolf. He was going to guide me on my shamanic path. I almost forgot him, but he intrudes on my thoughts every once in a while, from afar. I haven’t seen him in the flesh since a fateful night in September. Now, though, once a day or more I get telegraphic mental counsel from him. It’s complicated. I wake up and know it happened.

Little did I know I’d be going to China. I’m not that great at making travel plans and following through on them. But I went to a particular airfield, as seen in the vision, and went to a place, China, they say. The princess was there, and various underlings, No. 1 underling, No. 2 underling, and so forth. By the time I was through, I was making a mad dash back to the plane, pursued by underling 35 through 48. With 49 and 50 close behind. I was huffing and puffing like a madman, and escape was so tight for me, I just couldn't stand on ceremony.

It was too damned complicated for me; you get it? The bump on the head, the galaxy of lights, have intruded so completely in my mind, I can think of little else. How could I possibly go from my normal life to China? It's ridiculous. And when I was there, how was I to know that constantly asking them to repeat things was something they hate? My Chinese is terrible anyway; so I'm reduced to reading body language and discerning between the lines (guessing) what they’re saying. Then when I ask for clarification, it looks like I’m having a seizure, another no-no. Ask any Chinese you happen to meet, but be prepared to run...

The princess had two chief stewards and they were staring daggers at me. Then it went beyond cross-cultural problems with eye contact and actual daggers were flashed. The princess was banging the gong (but not to get it on), and dreaded Chinese minions scurried around the palace. They were more confused than I, and I was a total ball of confusion. I slipped beneath a hanging rug/tapestry and exited stage left toward one of those pagoda type of doors that tells you you’re in foreign territory. The gong repeatedly sounded, minions pulled out swords. It was a complicated mess, just the thing I hate.

With everything I had, though, I ran like a maniac and got the hell out of there. Chinese cowboys and indians were chasing me across a field the size of a football field toward the plane. I was thinking, That pilot (Gus) better be there. When, true to his charge, he had been watching in case of a quick getaway. As honorable Chinese say, "Him-know-me-too-good." That one thing wasn't too complicated. Gus saw how frantic I was, and compassionately kicked me in the nuts to calm me down. Then taxied down the runway and we were in the air in no time, just making the border, and missing a mountain by that much.

On the way back, Gus asked me what the hell happened. I had to say, “Don’t ask, I don’t even know!” The only thing I knew was this was not a place I should've gone, not a task I should've accepted. I didn’t even remember what the stinking task was, or why on earth they'd tab me as the guy to do it. The only thought that kept running through my head was, “I can’t have these complications in my pathetic life!” No matter how important the mission is, friends, someone else has to do it. I can’t be expected to do so much. My personal life’s a mess as it is without a million other complications to keep track of. I’m not your boy, folks, draft some other schmuck...

As for China and her people, the Chinese, if I ever hear of them or from them again, it'll be something on my schedule that I personally and with malice aforethought told them not to put there.
Posted by dbkundalini at 12:29 PM