To All The Children I Never Sired 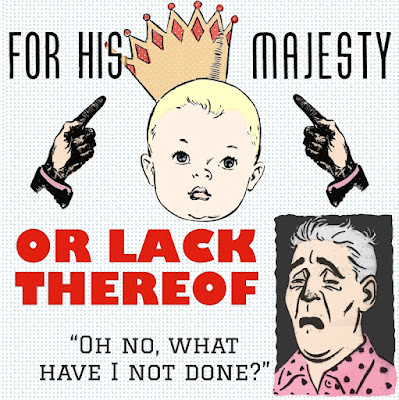 It could just be something that goes with the holiday season. All the little rugrats that would’ve gotten their little gifts from me over the years are once again not looking at anything under the tree. My shopping list remains unchecked, for there aren't any to list. Little Bertha, Edna, Tommy, Daniel, Wally, Florence, and Red, they’ve never seen the light of day, let alone worried about their gifts. Damn! That hits me hard, especially Red and Edna, two names I’ve always had a thing for.

That’s something to think about. Are my opportunities really gone? This isn’t like women, you know, whose biological clock’s batttery’s shot by the time they’re 40. I’m a full fledged male person, and I’ve at least heard we’re capable of shootin’ the moon well into our 70s. But when it happens at 65-70 it’s a sad accident. Old man has sex, then a stroke, in that order, but with the last ounce of his life-force manages to squeeze out little Rodney. Who grows up always questioning ‘why Papa doesn’t live with us,’ then learns the bitter truth and ends up in a home for perplexed kids, eventually featured in TV ads for that home, begging for just 63 cents a day so other kids won’t lack a dad. What would they do with the money raised but fix old guys like me?

I’m glad I used the name Rodney. Since I hate that name and would never name a kid Rodney. That gives me some comfort, some shelter from this feeling of dread, the dread of lost opportunities. I hope it gives me not just that one step, but 10 steps toward leaving this terrible funk! Maybe I could think of what people who have kids go through. Childhood illnesses, injuries, mistakes, crimes, desires, various resentments, the whole slate of life’s misfortunes.

I was downtown the other day and saw some random beady-eyed shrimpy kid tramp looking at me, like “I’m gonna steal your wallet, mister.” Maybe it was my imagination, but I got the hell out of there, and reported him as a malevolent street urchin. He should be in jail now, and it’s a pity if he isn’t. He’s definitely some stupid dad’s kid! At least I haven’t given life to such a creature! I’m a good person...

That’s a good way to get rid of the pain, Eureka! Balance it out, the pain of nothing, no wild honyocks to worry about, and by none I mean nil ... against the pain of actual flesh and blood duplicates, who’d likely as not have deep-seated resentments of their own, and be just the kind of willful little morons who'd take it out on me mentally and physically for giving them life, and I would’ve been done in by now. The way kids are, I'd be a goner. Why would they allow me to live to a ripe old age? I’d be dead. A corpse rotting away...

Happy holidays, everyone!
Posted by dbkundalini at 10:44 AM