My Hiatus Takes A Sword 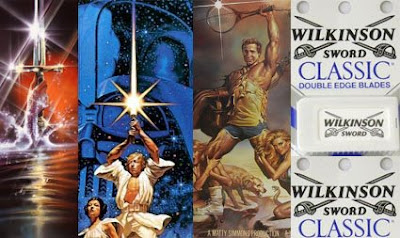 There was great widening and expansiveness in my room today, no signs of [an unnamed party]. The kitchen also had a real freedom and clearness. The dining area for the most part was clean, just some skittering of disparate parts looking for the main body. Even Grandma's room was free and clear, with only some minor clamoring at the cracks around the north window.

I knew it would be the living room and the north door in particular that would be the true test. In order to keep up my strict plan of ignoring [an unnamed party], I peeked in with the greatest discretion. I noticed the room for the most part was free and clear, but unfortunately there was much accumulation toward the door. My sense of hearing told me before glancing that it was there, breathing and hissing.

Through the north window I could see the heaving of a form mostly outside, and in my imagination I knew the north part of the yard must be a hotbed of activity on the part of [an unnamed party]. Then I thought the more I look, the less I'm ignoring it, so I had the immediate idea that I should retreat back to my room. But just then I saw the weapons in the northeast corner, scattered, and I guess the temptation was too much.

Since it seemed the seething was a self-contained interest solely at the base of the door, I inched my way toward the weapons. Seizing one sacred sword by the handle -- and here we're switching to the Mind's Eye Cam -- I saw myself rising up from a lake, like the Lady of the Lake with Arthur's sword in hand. But I myself was the one wielding it.

My body was dripping wet as I shed the lake's water. I was built like an Adonis, a real hunk, with exactly the right kind of man breasts, meaning taut and of a piece with a finely shaped, physically fit body. The Lady of the Lake was holding me at the shoulder, like on the cover of a romance novel. I had the sword aimed straight up, as though set to invoke the mighty power of heaven. If you've ever seen one of those old Wilkinson Sword commercials where the lightning hits the sword, yet somehow doesn't kill the wielder but makes him stronger and his razor sharper, that's precisely what it looked like.

I was rising from the lake, my body the size of a Titan if it was an inch. I had on a very ruggedly cut loin cloth, not so neat as to look sissified but not so gnarly as to make me look like a bum. It was cut in a ruggedly handsome way and arranged to cover but not fully obscure what had to have been part of the Lady of the Lake's real interest in me. No one's that clingy if she's not working a selfish angle, which I fully understand.

Then I glanced down toward her cleavage, to see what she offered, giving it an appraisal not unlike a jeweler's, fully aware that the cut was keen and the various facets endless. This is something I could seriously enjoy, I thought.

All of a sudden reality bit me, or threatened to, as I looked before me in the living room and saw with shock what appeared to be a serpent's head rise up from the smoldering mess that lay before me. This would be either its last gasp or the first breath on its way back to ascendancy. Invoking the power of my Lady Fair, I moved that sword so fast through the air that the whoosh is still registering on very sensitive radars in government listening posts. But the head was fast and dodged me successfully. I spun again and it dodged the opposite way. It had me 2-0 and I felt my life force starting to flag. I can't be defeated, can I?

In an instant I was back in my Mind's Eye, and Dulcinea lifted a Golden Chalice to my lips and gave me a sip of some kind of nectar. It tasted like a root beer float with something extra creamy added, maybe her satin sheets that had gone through a blender. She was rubbing down my chest, kissing her way from my neck downward. She got almost to my navel when my morality kicked in, and I said, "Thus far, my dear, and no farther ... until we're legal."

The promise therein awoke me to a new determination and I was back in the living room. The serpent had dodged me twice and thought we were going for the best two out of three. But My Lady beckoned me to swing what I've got, then I heard her whisper, "Now." I spun that sacred sword through the air with such raw fury and dead aim that not only was the serpent's head immediately severed but it lay at my feet like a dozen separate pieces of meat, like a ginsu knife demonstration.

As to the other activities of this morning, I have no choice but to say "To be continued..." It's time for me and her to find a justice of the peace.
Posted by dbkundalini at 7:32 AM