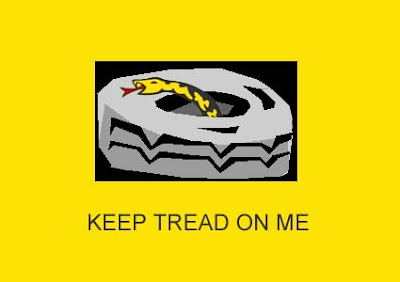 That's the tire talking, not the snake. The snake doesn't want anyone to tread on him, especially a car with tires. Because he'd be roadkill. But a tire seeks tread and needs tread to be a proper tire. Otherwise they might make a swing out of it. Or it'd fill up with water and be a breeding ground for mosquitoes.

I used to buy used tires when I was a youngster with my first car. I'd drive on it for a hundred miles, then it'd blow out. So I'd have to buy a new used one. But those were poorly constructed tires -- usually made by automation -- from the major industrial powers.

It's kind of funny, they don't hide it! You ever watch the car races on TV? They have to change tires about every 10 laps, so something's definitely wrong with them. They haven't changed since I was a kid!

After a while, probably with lawsuits, at least where I lived, you didn't see used tires anymore. I'd go to one of the tire stores and the guy would look both ways, like he was trying to see if the coast was clear, then say they didn't sell used tires. I always thought that was funny.

But we make tires, good tires, the kind of tires that you can use forever and pass on to your children as a family heirloom. If you get the 'extra tread' model, you're riding on a full 10 inches of nothing but tread, and only then do you come to the steel belting and other space-age polymers that give the tire its fundamental strength. 10 inches! It's like a birthday cake!
Posted by dbkundalini at 3:29 PM