I went out for a walk last night before bed. The heat spell and flooding we had a couple weeks ago are all over, and now it's pleasant. But that was some serious weather, so thank goodness we're back to normal. While walking, I was looking over the whole scene of the block. That's some serious commitment on the part of my neighbors, to man their stations, to keep their factories going, to give their lives over to hard work.

And it's not just the commitment they have to do the work for their self-interest alone. It's the commitment they had -- that we all had together -- in the worst of the weather a couple weeks ago. Remember, most of our factories completely retooled, and instead of making whatever it is we normally make, we were putting out air conditioners, fans, and sprinkler hoses. Or, with the floods, we were putting out sump pumps, water vacs, and drainage pipes. That was some serious response when the chips were down. 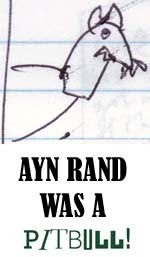 How do I know about Ayn Rand? Well, I am the philosophical father of the Residential Industrial Movement (RIM), so I should know something about philosophy. And I know that this lady had her own philosophy too. Which was basically 'dog eat dog' is a good way to live. That's some serious crap! You might say I've turned Rand on her head, possibly a pleasant sight, since I doubt all that many guys went there, and have become something of the anti-Rand. That's some serious distinction! And, hey, I'm actually smarter than Rand, because I've read her books but she's never read my blog. Got her there! So who knows most about whom? That's some serious observation!

I'm the opposite, or the anti-Rand, because my thing is not that the major industrial powers should have the playing field all to themselves, with the rest of us peons out there floundering helplessly without them. That's some serious predicament. Instead, I've got the peons taking the field, and turning Rand and the major industrialists on their heads, possibly a pleasant sight, since I doubt all that many ladies went there, in the case of the men, and we've already established that Rand was probably sewn shut. That's some serious pain!

Anyway, she's dead by now, and probably cremated, since that's the disposal method of choice for atheist prudes. There's no God to burn them alive, and she wouldn't want a peon undertaker undertaking something no man was able to do in her actual life. That's some serious perversion! And since I don't do blue material, I should leave well enough alone, and let the old virginal prune rest in peace. But you have to think, she'd gladly shut out the RIM, without any sense of remorse or human sympathy, so why should I offer sympathy? I know, that's some serious obstinacy. But she started it.

My walk continued. I saw some children out playing in their dad's runoff ditches. It reminded me of what we used to do, which was to find a pond and play in it. Those were the days. Grandma would tell us boys to "Stay out of that stagnant pond!" But we'd ignore her and go swimming anyway. Playing was serious business back then, and for us that was some serious business! It wasn't a matter of sitting in front of a video game all day for us. We saw each other naked more times than I care to count. And that's some serious eye-opening experience, to see some of them are as big as your wrist. A regular fountainhead.

All in all, I'm very proud of my upbringing -- and whatever it was -- moxie or whatever -- that they instilled in me that's brought me thus far and undoubtedly will take me farther in the days to come. That's some serious moxie!

I continued reflecting as I walked on, then I started to turn in. I looked up at the sky and saw that it had to be close to "Grain Belt," my pet name for 9:40. That's some serious passage of time. And that's some serious pet name.
Posted by dbkundalini at 4:34 AM