The Editorial Board -- I Fire Frank! 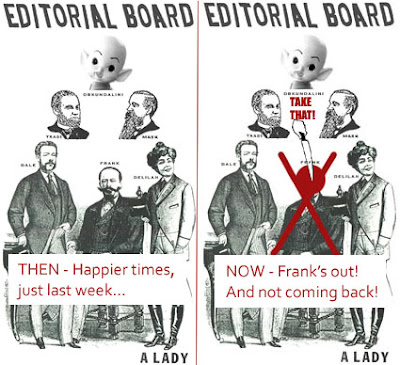 Well, just like that, the brand new editorial board for my blog has been whittled down to five, including myself. I wasn't expecting it to happen, but it did. Frank turned out to be a bad seed, couldn't be trusted, so now he's out.

It's only been a little over a week since I named the board. And, frankly (no pun intended), I had high hopes for Frank, since he was, as I said in introducing the board, a serious person. I had hoped we would have a long, happy relationship, giving me the chance to bounce serious ideas off him. Now that he's gone, I'll have to hope that either Trade or Mark are serious characters willing to help. Dale has a funny side, and Delilah being a woman, well, say no more...

But play with fire, Frank, and you'll get burned!

As it turned out, Frank became critical of the blog's direction, apparently being upset overall with my recent posts on "The Imaginary Stud." In particular, he seriously objected to the post on "Your Biological Clock Is Ticking," and what it might mean for premarital sex and pregnancies, although he didn't bring his concerns to me. He took it to the rest of the board in a secret meeting, with what looks like the intention of forcing me out and taking over.

It happened like this: I was watching TV, then I went to the kitchen to get a snack. I happened to glance out the window and saw the lights on in the garage. That's strange, I thought. So I went out and heard voices. I peeked in the window and there they were, holding their little secret meeting! I opened the door and made my presence known, resulting in a lot of guilty faces. Delilah quickly covered the minutes book with her hands.

I had an intuitive sense of what was going on. I demanded the minutes book and glanced over the page, seeing that Frank had called the meeting to order, etc., and saw a summary of his complaints. I declared, "This is not an official meeting because I wasn't notified. You were brought on board to help me fulfill my hopes and dreams for my blog, not to immediately usurp my place and take it over for yourselves through blind ambition!"

I let the others slide and trained my fury on Frank alone, telling him how painful it was to find a shiny knife with his initials thrust squarely in my back. I shouted, "If there's anyone going to be cut, it's you, Frankie boy!" He turned white as a ghost, white as a sheet, extremely white, white as the driven snow. Of course he knew he was ... busted. And there could be no reconciliation. We went on like that, with blustered rejoinders and hasty, non-scripted parries.

Then I accused him right to his face. I accused him of making passes at Delilah. He insisted on his innocence and said that was "The furthest thing from my mind."

I countered, "The furthest thing from your mind? Is it really? You're thinking of it right now! Even now you're forming a rather nasty picture in your mind of you and Delilah making mad, passionate love on my kitchen table! Try to deny it!"

He looked guilty as hell but had a convenient comeback. "Yes, of course I'm thinking of it now, because you said it, making it impossible for me to not, fleetingly at least, have some mental conception of such an act!"

I was spitting mad and declared, "You've convicted yourself with your own words!" Frank immediately shrunk in my sight like the maggot he was, and I had to count to 10 to restrain myself from squashing him underfoot like any other vermin. To think he'd do that to Delilah, and on my kitchen table, when I had made such a point of warning them away from her. Disgusting!

As for the rest of the board, after Frank vanished into the night in disgrace, I gave them a stern talking to, making it clear that I knew what was best for the blog. Still, to be conciliatory, I said if they had any ideas about it to please feel free to come to me personally. I assured them I'm a reasonable man, which I believe to be true.
Posted by dbkundalini at 12:39 PM

Labels: blogging, Board of Editors, conflict, Editorial Board, secrets, sex