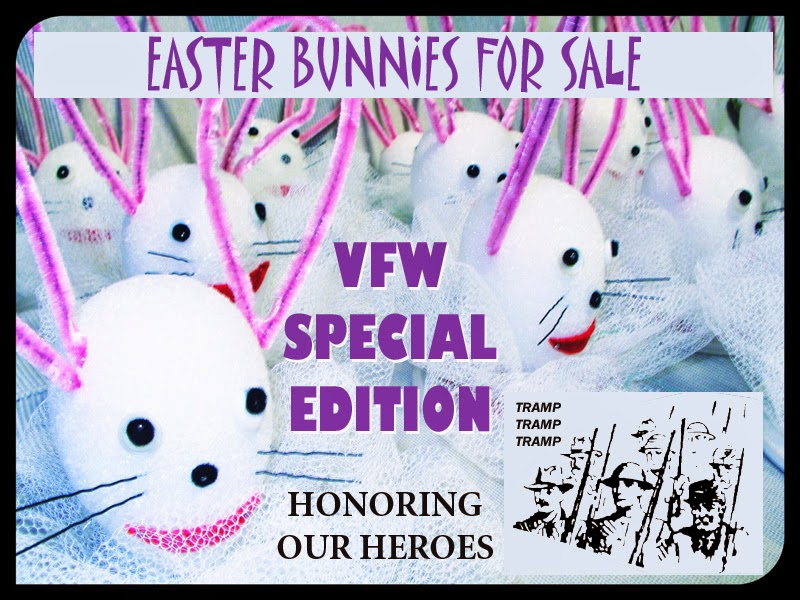 It's ironic that, after the Army couldn't save from destruction the shopping center, where we've always had the Easter craft sale, this year we had it at the VFW hall. Of course if you lose the battle you shouldn't reap the spoils, but I'm only one voice.

Right away, I saw this one local character, Terry, a shell-shocked Vietnam vet, handling everyone's stuff roughly. He left some of the ears on my bunnies bent, then was oblivious to it. I was using psych tactics on him, busying myself with unnecessary rearranging when he was around, trying to get him to leave. So he didn't do too much actual damage.

The place was a terrible place for a sale. They have their bar right there in the next room with an open door between us. You get the secondhand smell of drinks and smoke, pretty intense. Terrible. I saw the pool table, untouched, with the casual light above bearing down on it. There was a quarter in one of the corners, like someone called next game, but was then was so shell-shocked he forgot.

In our room, the sale area, there was a similar bad vibe. The walls were lined with huge black and white portraits of past commanders, trim looking old guys, mostly from the Greatest Generation. Then there's a number of more modern pictures, some in fading color from the '60s. The '70s pictures are more casual, showing the breakdown that started after Nam. And I believe Ronald Reagan allowed much more breakdown, then, in the '80s. You see it in the '80s pix, hair over ears, bushier mustaches, and darker glasses, in what might be called the military's Mr. Potato Head years.

None of this was good. Because the whole point of a craft sale is to get women in. And women don't want to come to a revolting man-cave like this. You'd be afraid to bring your kids. They'd catch one glimpse of Terry and swear off war altogether. So the sale sucked.

I had plenty of time to look around. I and some of the other crafters -- we're usually complaining about something -- could do nothing but shake our heads and laugh. Once you see you're not going to make money no matter what, that's when you laugh. It was different at the shopping center; you didn't always make a lot of money, but the potential was there. That's why we were always bitching.

This place, though, with the beer/smoke/old carpet odor, the odd stacks of chairs against the walls, the old nicked-up wooden coat racks, the dim lighting, and those godawful leering pictures, killed us. And the flickering fluorescent lights! They made my bunnies look frail and sickly. And their purple ears don't need help! And the Styrofoam, my God! I was afraid it was softening up, maybe even subtly melting from the alcohol (actual and from guys' breath) in the air. They say Styrofoam lasts forever in the landfill. Maybe all they need is the VFW to go and break it down!

On the positive side -- just to be fair -- the tables were definitely cheaper. Although, to be negative again, if you're not making money, what's the use? I felt like a crafts sadist sitting there. You have to have some traffic, besides these shell-shocked guys bending things and breathing on  you. As I was hauling my unsold bunnies out, I saw Terry one more time: hat on backwards, food on his mustache, saluting the jukebox, in a word, shell-shocked.

So, unfortunately, I ended up with bad results today, no big surprise, I know. At this rate -- money being what it is -- I might be able to afford a medium Easter ham. But that'll be it. No sides, no bread, no glaze on the ham. Just one dry naked bare ham. But, I'm happy ... Keep repeating, I'm happy; better than an empty table.

Never again! Seriously, this is my vow before God and man, and please, someone, mark it down! We will never again have the craft sale at the V-freaking-FW, or I'll know why!

2013:
Easter Bunnies -- Is This The End of Crafts?
The Easter Craft Sale -- Post-Mortem
Posted by dbkundalini at 2:12 PM