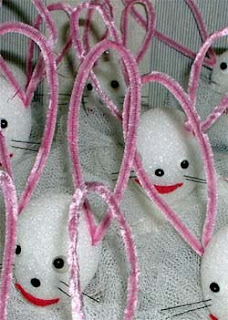 By the time you get to Easter the bottom has completely fallen out of the Easter bunny market. There's a good reason the stores are stocked for Easter right after Valentine's Day.

But for the "small guy," the guy like me who doesn't have a store but has to depend on the rare craft sale to get rid of his wares, I don't have that many opportunities to garner a surpassing crowd to sell to in my hour of need.

The local man, the small guy, takes what he gets "and likes it." I might not like it, but I take what I get. Which in this case turns out to be the bottom scrapings, the castoffs of the mega-moguls who own and operate the shopping center.

Along with the other crafters, I share the same opinion: We wouldn't put it past them that they insulted us on purpose simply because they could! That they knew they had us over a barrel and decided just to rub it in! That they would slap us in the face because their lives are so fundamentally unhappy -- their millions not bringing satisfaction to their inner being -- that they need someone to lash out against, hoping to brighten their day with someone else's misery! There's no other reason we can think of to explain the poor setup they gave us, down the bathroom wing of the shopping center where barely anyone goes.

They raised the table fee and gave us a crappier location.

The crafter's life is not really something to be envied. It may seem exotic to the average person, like we're a band of roaming gypsies with a table and a tub full of styrofoam Easter bunnies. This is a true story: I actually had a naive little kid come up once and ask me for my autograph. But beyond the glamor of that moment and the glamor people think our lives are, it's really more a life to be pitied. And the shopping centers know that. If they could get a juggler in there cheaper they'd go for that. But, no, it's the crafters who are willing to pay for a table and space, just to sit there and stew in their own miserable juices. Jugglers are smarter, they demand their pay up front.

I always feel a little funny about doing it, which is why I don't do much of it. I'm not even a regular guy on the scene, far from it. I make it out like once a year, if I've come up with something. I don't need the money as much as most of them, thanks to my being on full disability (I have a game toe). But sometimes I come up with something and try to make a little extra money, just to have some change in my pocket. But like I said, I feel funny about doing it, mostly because I'm a guy and not a woman.

To me, when you go to a craft sale you want to see women selling this stuff. They look so much better. You see a man behind the table selling Easter bunnies, like in my case, and you immediately think there's something wrong. Men look bulky back there. And men have a naturally impatient look when they're behind a crafting table. Because we want to make money left and right. We're not happy just sitting there idly, looking at our merchandise setting idly. It's kind of funny, too, that it's the cuter the craft the more impatient the man looks. Any man who has something with lots of rounded hearts carved in wood is going to look bad. So you can imagine what I looked like with these Easter bunnies!

But as it turned out I sold close to 50! So people to a certain extent were able to overcome their aversion to a man behind the table, facing their fears adequately. I was trying to look as engaging as possible, randomly laughing and seeming to be happy. There's a few psychological tricks you can do. Like if you see someone coming, grab your cell phone and talk in a friendly way, then a random laugh, then say goodbye and hang up while shaking your head and smiling. Folks aren't really thinking it over but now they know they can trust you.

After the sale I went out with a couple of the other dealers to get coffee. It gave us a great chance to grouse about how badly it went, the lack of customers -- there was also a bake sale in town -- and how the shopping center really did slap us in the face. Because they can.
Posted by dbkundalini at 4:17 PM