Boxing Up My Bunnies 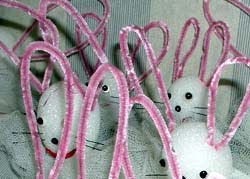 I'm boxing up my excess Easter bunnies, with the season now being officially ended. I'd like to box their ears for not selling! Since rabbits are known for ears, just a little humor there.

Their ears are just pipe cleaners, in case you can't tell. To get pink pipe cleaners you have to go to every craft store in the world, it seems. They say they can't get them. But you keep up the pressure, eventually they'll pull a box out from under the counter, way under the counter. They're looking around furtively, of course.

I'm trying to put them away nice and neat, so they look reasonably good when I get them out next year. Because maybe I won't be able to get the ears next time. But I've always been lucky.

You think you could make one of these? There's really nothing to it, although I don't want to give away the entire store. The heads are made of Styrofoam, and the rest you're going to just have to guess.
Posted by dbkundalini at 8:06 PM