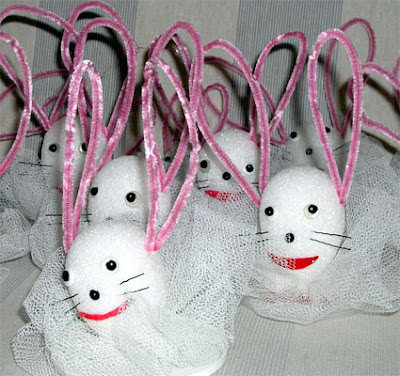 Like I've been doing for a number of years now -- I think this must be 10 years -- I'm selling Easter bunnies at the shopping center craft sale. Thank God Easter only comes once a year, because sitting here, and of course putting up with all the crap, can be almost too much.

I'm always an optimist. Especially when it comes to religious holidays. I always think religious holidays ought to bring out the best in people. So that, say you're at a craft sale, they ought to be a lot more willing to part with their hard-earned money for whatever trifles people are selling, for their own benefit, and also because I'm helping them get more into the spirit of the holiday. But no, it's the same old crap, a big disappointment from my point of view

And then there's the craft sale business period. It's gone to hell, I think. The shopping center doesn't respect the hard work we put into crafting They don't respect crafters, period! Except for the bigger crafters, who are practically moguls compared to the rest of us, the peons. That really came out this year especially. The way they had us set up this year, of course we were down at the far end, in the vicinity of the stores that start up and shut down a few weeks later.

But here's the twist this year: They set up the moguls first, then dribble dribble dribble, you have the next top dog, then another, and so on, until you get to the true peons, the few of us with only one table each. I was right there -- those bastards -- at the very end of the line. So that by the time any customer might ever wander down as far as me, they'd most like spent all their money, or were looking like they thought they'd be mugged if they went much farther.

I'm very fortunate that I only do this one sale now in the year. Because there's nothing more unpleasant than hearing the grousing of crafters at craft sales. Which I actually caught myself joining in, because, for crying out loud, what are we, scum under people's feet? By the time you put money into your supplies, your table rental, and the entire day's time, you're lucky to make pennies on the dollar. You're sitting there like some kind of off-scouring, with squalling kids and cranky mothers who don't feel like buying them cute bunnies, etc. It's enough to drive you wacky.

But I'm focused on my own grief. My own grief keeps me very busy. Although, yes, I was listening to what everyone else was saying. About the moguls and the rest of us. That was a big topic of conversation. What I really think might be behind it, ultimately, is the old tactic of divide and conquer. Like this: The shopping center knows we hold a cudgel against them for the yearly mistreatment. But what if they divide the crafters and get us at each other's throats? Suddenly, we're not standing united and the shopping center steamrolls us. Not that standing united really has done us that much good in the past.

But take this year. If we'd been united, maybe they would've rethought the increase on table fees. Five damned dollars more! And I can't raise my prices. I'm already scraping the bottom as far as any profit goes, but in a bad economy, you tell me, is anyone going to pay top dollar, even though they're clearly worth it, for a few styrofoam bunnies? No, the morons are pinching pennies, probably saving their money for food or cable TV, which also goes up all the time.

Add to my misery the fact that I always feel I have to give them a bargain if they buy more than one. They're $5 each, OK? It's set in stone, because I can't raise the price, as I said. But if you buy two, then they're $9 total. I'm losing a whole buck everything someone wants two, which is about the same as giving the damned things away. A few twofers I can absorb. But if people knew my margin, they could wipe me out on these sale just like that! So I'm sitting there praying two things, 1) For a sale period; and, 2) Please buy them one at a time; the twofers aren't helping me...

That's the financial beef. Then there's all the rest. Like everybody and their damned cameras! You tell me: Isn't it widely known, universally known, that you don't take pictures at craft sales? It's simply not done! It's forbidden! And for very good reason. We don't want the rest of the world taking pictures, then stealing our ideas and making their own crafts at home. This is a point all of us agree on, mogul or peon. On this, in fact, it's the moguls leading the way. They go to enough craft sales, they have professionally-made signs, full color with illustrations, a camera in a red circle crossed out, meaning, "No cameras allowed! No pictures, please!"

But the big difference between now and, say, 10 years ago, is there's a lot more cameras. And people, especially kids, who aren't shy about popping out their phone, then whipping it up to take a picture of your stuff. They don't think a thing of it! It's in their nature now! They're stupid! "My hand is permanently affixed to an iPhone camera." People used to have five fingers, now they have a sixth finger, their camera! That's what it looks like. So there we're sitting, the crafters, rolling our eyes at each other, trying to bite our tongue, and casually putting the signs a little closer to the flow of traffic. Fat lot of good it does. They don't teach reading in school anymore!

I'm sitting there, watching all this go on, and I was that close, I was about to bust. But thank God I held it in, for the most part. Because this one guy, two tables up from me, he had his fill, and he did bust. It was after noon, he hadn't eaten, thanks to being at the end of the line and only making two sales -- he paints smiley faces on jelly beans -- so he busted. And I know that's no excuse. But these brainless teenage girls were going in real close on his beans, snapping pictures of the smiles.

Well, he showed them a scowl! "Do you not see these signs? 'No photos allowed.' This isn't a photo studio, darlin'! The items you see on the tables are for sale. Otherwise, everything you see is copyrighted, my intellectual property. So no pictures, thank you!" That was a very snide 'thank you,' which really showed them, since they immediately left with a bunch of swear words barely concealed under their breath, and, incongruously, giggling. The guy was sitting there, red as a beet, and fuming. He looked around for some support and our eyes met. I gave him a thumbs up, then decided to rearrange my table.

It's been dead since then. Like some kind of cutoff point. Like maybe the girls went back and spread the word. Probably not. It's just always that way after noon. The ones who wanted something got here early. Anyone who shows up after noon is here by accident, and they don't care. To them you're just garbage blocking the halls. Except for me, I'm so far down no one generally makes it that far.

So the bottom line is, I sold only a few, less than 20. Some of those were twofers. The good news, if I'm willing to dig for good news, is I won't have to make quite as many next year, since I still have plenty of stock.