Bad Health -- Are These Visages Credible? 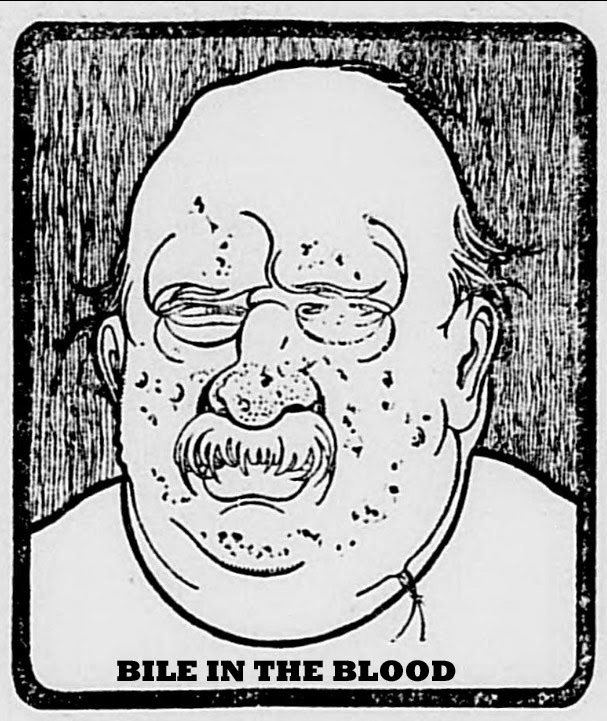 I've spent a lot of time lately looking at old newspapers online, most recently stuff from 1901. That's a long time ago. Sometimes I'm thinking, Every one of these people is dead, the guy who wrote the story, sold the ads, ran the Linotype, drew the artwork, and manned the press. Then all the people in the many stories throughout the pages, a'moldering in their graves.

In all this viewing, something that leaps out is that the papers were chock full of patent medicines, sexual debility doctors, electric belts, and promises of good health. No TV, radio, or internet, it was all happening in the paper. There's so many ads about "Weak Men" (in that way) that it's a wonder my grandpas were able to get the job done that led to me! The times were the golden age, I'm proclaiming, of this kind of stuff.

In this post I'm featuring some illustrations, the worst ones, that are alternately funny and sad. Sad because maybe they're more or less accurate. Funny because surely they're exaggerated in places. Leading me to this wonderful dynamic question: "ARE THESE VISAGES CREDIBLE?" I'll try to answer that question.

Look at Mr. Bile in the Blood. No doubt the wrong mixture of bile in the blood would be a disaster. Not being a doctor, I don't know if there's a healthy level, or if you need to keep all bile away. Certainly if you end up looking like this guy -- a melted mess with a mustache -- I'd prefer to buy whatever they were selling to combat it. Yikes! To me the visage doesn't look credible. The mustache is credible, everything else is haywire, especially the look of his eyes in full meltdown. 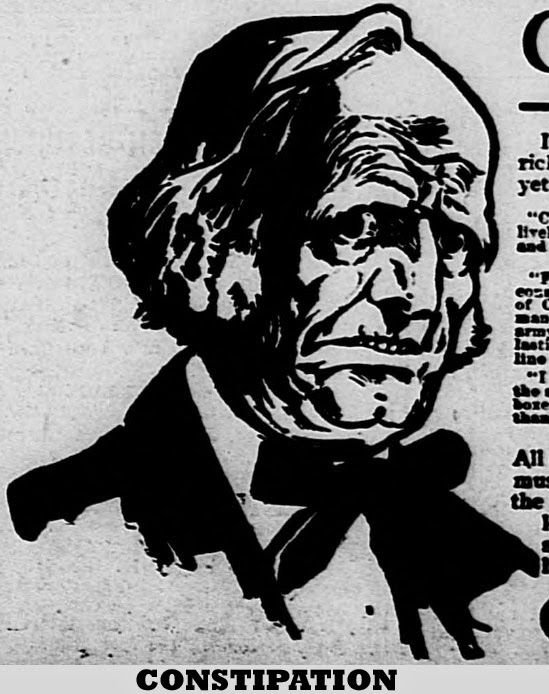 I feel I can speak authoritatively on the credibility of the visage. I've been blessed in many ways and don't feel I've had any real trouble with constipation. But I've known plenty of people who have. They're often busy with our modern day remedies, over the counter laxatives. It can go on quite a while. But generally, even though we don't talk about it much, they seem to be back to normal. I frankly have never seen anyone look as uncomfortable as this guy. Whether his visage is credible is going to come down to this, suggesting that he didn't look that spry to begin with. He already had the wrinkles, the extra heft in the chin and cheek area, and the deep set eyes. What constipation did was furrow it all (from worry) in the bridge of the nose and push his mouth slightly open (discomfort.) Conclusion, the visage is credible, but not attributed exclusively to constipation.

Here's one for the ladies. We have five examples of women suffering menstrual pain. In my opinion, four look pained but normal. Their visages are, yes, very credible. That leaves us the sweet young thing in the middle, who, frankly, doesn't show feminine features. I keep looking but all I can see is a very stern, evil man. And yet, what? If he's anything like me, menstrual pain is the least of his worries. What is he, in a polygamous relationship with the other four and just pissed that that time of month is simultaneous for the wives? Surely not! The only conclusion we can reach is that this is meant to be a woman, whose sufferings are many times worse than average. Her visage is so contorted from the pain that there is absolutely no hope, except for whatever the ad was selling. My conclusion, four of the visages are credible, one isn't. 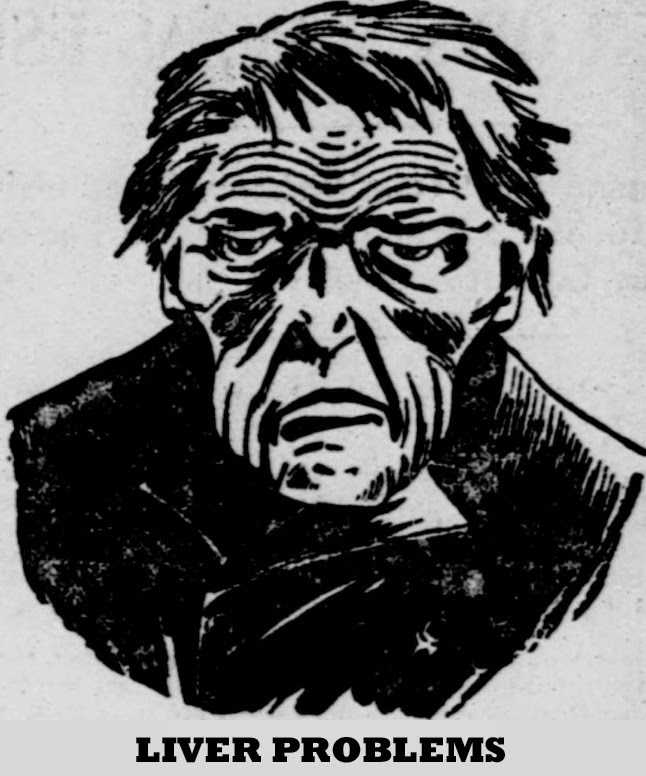 This guy I'm putting generally in the same boat with Constipation Man above. Although with constipation you're usually fixed up within a week. When you have liver problems, that's a whole different thing, going on and on. Even though I don't know anyone who's had liver problems ever looking like this, I know they don't look great. He's in the same boat with Constipation in this regard, that he probably didn't look fantastic to begin with, with his appearance then merely aggravated, how ever dramatically, by his liver. When I first saw this one I thought of Frankenstein or Lon Chaney, the man of a thousand faces. He probably did this one in one of his movies. So I'm saying the visage is credible, but a little deceptive, since he surely had preexisting conditions. 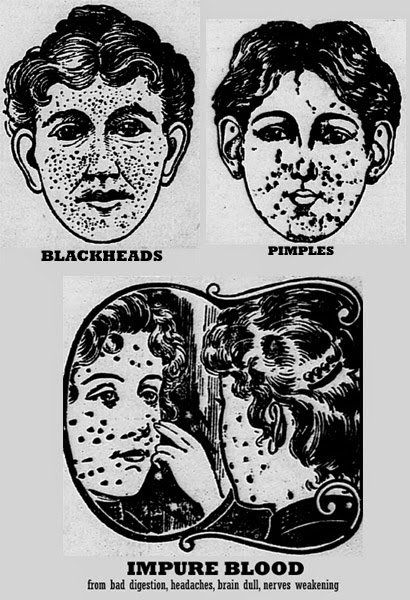 The top two, all of us have had experience with pimples and probably blackheads. It's the scourge of our teenage years, right when we want to look our best. You suddenly break out, and at terrible times, right before the prom, with pimples. Blackheads are more controllable because it's basically dirt in the pores, but pimples have a mind of their own. They come from God knows where and look bad. The credibility of the visages, judging it, has to take into account that these are black and white pictures from the paper, and that they have to be pronounced to really show what you're illustrating. I'm giving them credibility, then, based on the printing technology of the day.

The same allowance will be made for the woman with impure blood. Although just diagnosing it myself, with my only information coming from these illustrations, it looks a lot like an outbreak of pimples. But no, according to the caption, she's got impure blood, coming from bad digestion, headaches, dullness of brain, and weakening nerves. I'm going to negate the credibility of this visage on this basis, that she ought to look a whole lot worse. She at least has it over Constipation and Liver in that her visage looked pretty good to begin with, but surely all those ailments, the full list, would make her look worse than spots on her face. Look how pure her hand is! Come on!
Posted by dbkundalini at 5:33 PM