The NSA and Baby Monitors 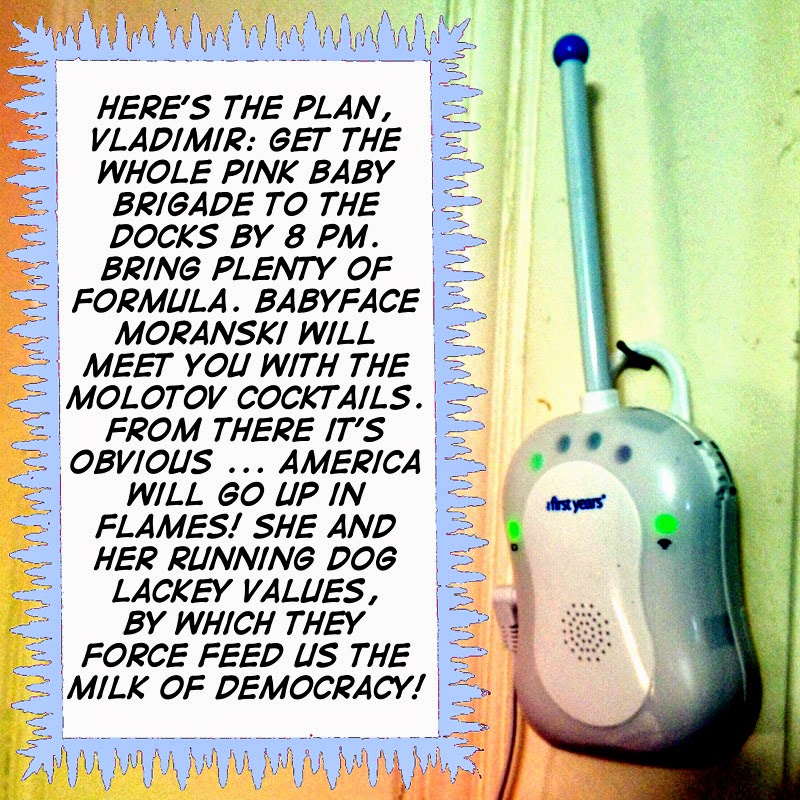 Welcome to the true nanny state, as our National Security Agency (NSA), with their great success at surveillance on all other fronts, turns its attention to the last frontier, baby monitors. These limited communication devices, usually with such innocent messages -- "Good baby," "Baby wet," and "Hey, Mom, get your butt in here!" -- can also be channels of deceit and intrigue, detrimental to national and international security.

They say kids are growing up faster all the time. We've all seen that's true. Kids shooting one another, kids blowing up schools, and of course, kid entrepreneurs buying up multinational companies and burning them to the ground for the insurance. With schools -- this is no laughing matter -- kids are developing a war mentality: "If I'm old enough to go to school, I'm old enough to vote and drink." It's a lot different from when I was a kid. If the teacher saw you with a knife, let's say, she gave you a thumbs up and we continued our mumblypeg game. But the downside was we couldn't vote or drink.

Now it appears, we're facing an even more insidious enemy, the innocent baby. Think of Vladimir Putin. Is there a bigger babyface than him on the international scene? There actually is, Kim Jong Un, but we've got him contained. That leaves Putin, who, with his KGB background has brought the old Soviet mindset to our shores in the most despicable manner possible, in our freshly-minted youngsters, fresh out of the womb, fresh into the party! Communists!

Look at the way they do it in hospitals. The babies are in a little commune behind glass, one big happy family, sharing and sharing alike, identifying themselves by party colors, pink and blue. I think I've got that right. Pink field, blue sickle in the corner. It's only right that the NSA would do their best to protect the homeland, gathering and massaging all the intelligence they can get. I know they even have a number of my calls by now, checking around as I have with various baby stores about monitors in researching this article. Some creeps google pressure cookers -- and not just Grandma -- I google baby devices. Both dangerous to do.

Anyway, we've always looked at these monitors as completely innocent, because Mom, and to a more limited degree Dad, thought they needed them to keep Junior or Princess protected. God forbid they soil themselves and they miss their immediate cry! They might have to lay in their own filth a few seconds. Seriously, my opinion, we've been babying babies far too long. We should let them experience life as it really is, tough. Lie in it, kid! Learn what Desitin's for! Of course we wouldn't let them suffer to the point of demanding the vote and liquor, just give them moderate toughness, of the right kind, American toughness.

But no, instead, by babying them various party apparatchiks have taken advantage and infiltrated the nursery, knowing the little buggers would reveal information via the monitor. "What's your father up to?" "Burning flags in the basement." "What's your mom doing?" "Something with a breast pump, sending milk to Russia and Red China, hoping to develop super warriors, that America be destroyed from within and without." God, that's insidious! Who was it who rued "The Enemy Within"? One of the Kennedys, Churchill, or some bigwig like that? They didn't expect the enemy within to be so young ... and apparently so helpless!

Then there's kids who aren't merely passive and accepting of outside schemes. There's the ones with brains -- probably reincarnated Cold Warriors -- who know where the grids are and what grids do and can be made to do. They're the ones who immediately know how to communicate via these obscure radio frequencies -- baby monitors -- the plans of a mastermind: "We'll meet at the docks. The soldiers are hiding in tuna barrels. You'll know them by their breath, smelling of fish. Get there by 8:00 p.m. Bring mayo."

I have to say, friends, I'm glad -- you don't know how glad! -- the NSA is on this. And patrolling neighborhoods all through our threatened land. Recording baby monitors and protecting democracy from future generations, hopefully never to be born.
Posted by dbkundalini at 11:37 AM