The Army Corps of Roastin' Ears 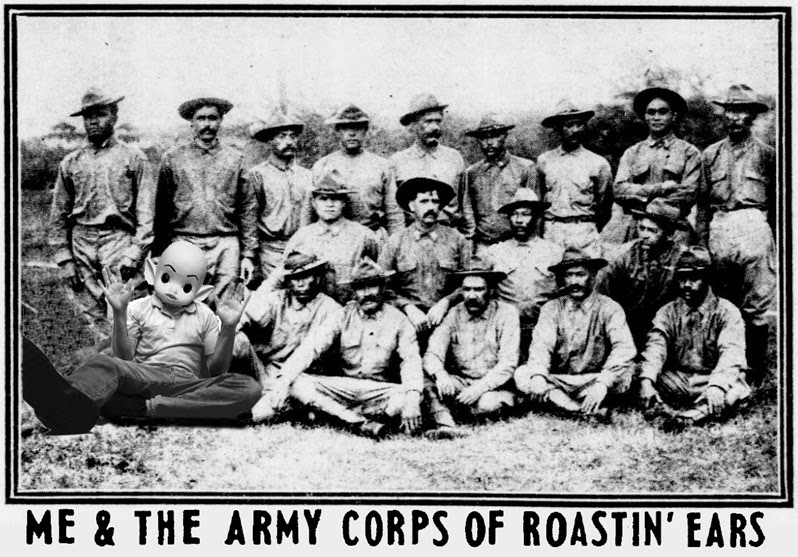 Hey, guess what! I am an official honorary Army Corps of Engineers temporary one-day cadet! I got to hang out with the troop, and the whole bit. This was actually Sunday night at their annual picnic, at which a fine time was had by all.

You might ask, Who did you have to know to get to do that? Well, as it turned out, I didn't know any of them. But I entered a contest that I saw on an obscure bulletin board in the dark corner of a little known coffee shop. It was this: "Guess the total cubic feet of output at the dam this year from the first day of spring to the first day of summer ... to the first day, not inclusive."

They print a daily figure in the paper that's purely an average. So naturally, I had to go beyond that. I did what most Super Brains would do; I went to the Army Corps website and found the average output for every year since the dam was built, specifically omitting summer, fall, and winter months. I focused on spring. But I didn't stop there, because I went back and weighted the averages based on rainfall amounts, fluctuating temperature, and other factors. Other factors included average river depth (output) for those years and adding in whatever fish, turtles, birds, and deer might drink, and I had it.

Well, wouldn't you know? (I'm blushing.) I was so close to the actual answer they accused me of cheating, having ties to a mole in the Corps! I was off something like an eighth of an inch, having forgotten that in those hotter years swimmers would've carried off water their swimsuits had soaked up, thereby reducing the output however infinitesimal it might be. Then if you figure an occasional camper pees while swimming, it gets tricky.

So it was a mixed bag. Like I said, they thought I cheated, so they were giving me dirty looks. I kept throwing up my bare hands, "Mea non culpa!" My suspicion on all this is the actual moles were trying to get their friends in, but warned them to be off by at least a foot or two. They didn't know Super Brain was on the case! (Sorry about the "Super Brain" references. It's a pet name I have for myself, which I don't always say in public, but in this case it's warranted.) Regardless of what they'd planned, though, there I was and there I stayed!

The Corps actually warmed up to me after a while. As everyone knows, my specialty is Group Dynamics, so I really know how to schmooze a crowd. A bunch of compliments, oohing and aahing over their magnificent accomplishments, and telling them I've always had a soft spot for the Corps -- ever since my dad showed me my first dam -- and they were mollified. You have to admit the Army Corps of Engineers is amazing. They don't just make dams to last a few years; they make them to last a century or more. On the other hand you could make the case they're just beavers with better equipment.

Whatever the case may be, once they relaxed, we were good buds. You know, I said they could build great dams? They put on even greater picnics! Wow! Try to get a beaver to do that! The food was coming on hot and heavy, including everything you might hope for: Hot dogs, hamburgers, steaks on the grill, pork chops, and my favorite, roastin' ears!* I absolutely love it, even though I don't do much of it at home. It's really great, though, when you're at a picnic and they have enormous grills and they're roastin' corn still in the husks. You see those blackened husks and they're great, and they smell good. But it's all happening on the inside, where the corn is perfection! It's like dying and going to heaven, where I hear cookouts like this are frequent.

Even though we were getting along great, I still hung back. As I teach in my Group Dynamics seminars, those around you generally admire humility more than jumping in. Pretty soon they had me center stage, as would be expected, and I was actually helping the head man, the General, man the corn grills. He'd say "Flip 'em!," I'd salute and do it. He'd say, "Move those over!," I'd salute and do it. Finally, he said, "You get the first ear!" I dug right in, forgetting to salute. Then I came up with a big bar of melting butter in my hand, thought of it and immediately saluted, getting butter all over my forehead and accidentally flicking some on the general's uniform. He gritted his teeth and said, "At ease, soldier," before wiping with a napkin. I was ashamed, but still proud that every time in the future he sees that stain, he'll think of me ... and, hopefully, smile.

In the end we were all such friends, they sang "You're in the Army Now" especially for me, and really meant it. It was great. All hostilities had ceased. We ate so much we were stuffed. And drink ... we drank so much beer, and peed in the lake so many times, the output might threaten the entire structure.