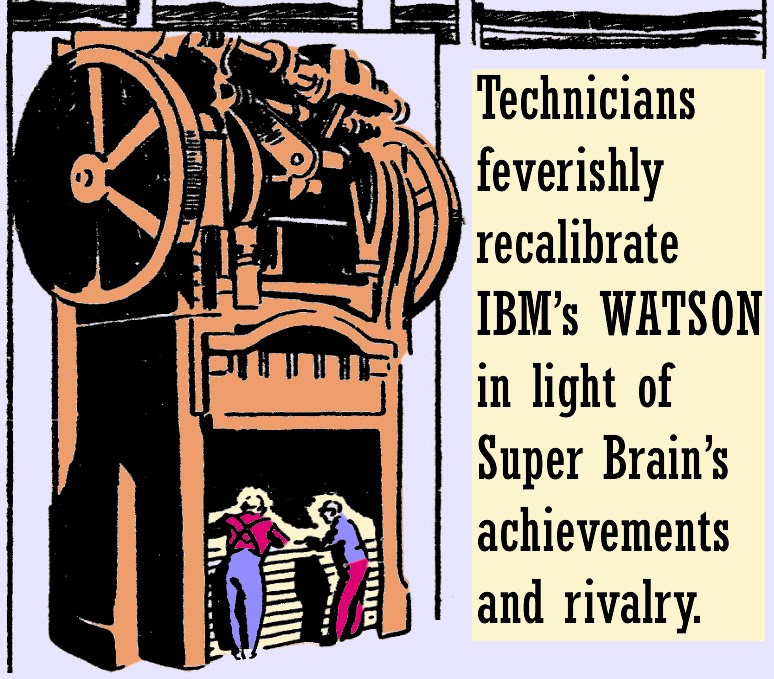 I've mentioned a few times over the years that one of my pet names for myself is Super Brain. It's done wonders for my self-image but has been a detriment to my love life ("Super Brain knows you're in it for the free meals.") Be all that as it may, the name's stuck. And for good reason, thanks to my super brain, silly. The following is an account born in my meditations just this morning:

Super Brain is alone with his thoughts. At this moment he's monitoring the various energies as they go deep, seeing how they generally bypass actual information of a practical nature, inventions that might help mankind in some way, and veer off into fantasy realms, often tripping over themselves.

It's something like "Journey to the Center of the Earth," that story. I'll note it's a lot easier to make the descent than it may be, looking ahead, to get back out. I can't depend on a rock basin atop a volcano ready to blow. Super Brain calculates the odds. The rock basin and volcano being there, pretty good. Blowing at that precise second, less so. Survival with the heat and the difficulties of landing once blown free and clear, also not good. If that happens Super Brain calculates nothing but pain, discomfort, and a terrible death.

But we're far from that point. Super Brain continues to descend to the depths of himself. I see channels of light, synapses larger than most people's. I'm seeing these are synapses that don't mess around. For a lot of people, they're always shorting out, barely making a connection, but these are ones that receive from the previous synapse and add motive power before sending it to the next. Meaning -- ye gods! -- when a thought starts to occur it's already huge and powerful, but by the time it's fully considered, it's Everest! The fact that I can simultaneously shrink it down and make it presentable to others, as in this report, is itself a seismic miracle. Of tectonic proportions. Super Brain double backs on himself with amazement.

That's something to consider, although it threatens to put Super Brain into many simultaneous massive loops. Still, "Know thyself / Physician, heal thyself," -- if Super Brain wants to consider its own mighty workings, vis-a-vis the relation he has to himself -- although this is where a monumental conscious split might happen -- there's great danger in telling Super Brain to settle down. I must be careful not to become multiple Super Brains, as that would crowd out others from their rightful place in sharing the thoughts of the world. It would be immoral to swallow up all consciousness. But Super Brain is like the proverbial 5000 pound gorilla, demanding free reign, meaning we have to stand back and clean up the damage later.

Now I'm going to perform an utterly magnificent feat, to cast Super Brain's thoughts on terrain and realms very far from it. My first stop: Out by the Tastee Freeze. What do I behold in that far off locale, at least 60 blocks from here? They're still closed. They've been closed for decades. You'd think someone would buy the run-down property, tear down the old place, and put something else there. A Taco John or something.

Super Brain sees -- wow! -- an investment opportunity. Super Brain actually truly sees the possibilities of entrepreneurship. All it'd take is a quick call to corporate, a plan that Super Brain might work out with lawyers -- himself able to guide the best legal minds in plush offices around the square. But is that really the direction Super Brain wants to go? It'd be good money. At first, though, his energies would be tied up in hiring teenagers to make tacos, and he can see -- thanks to the vast energies making these thoughts simply occur -- that would be so unrewarding.

Super Brain is not tiring, no. But Super Brain's vast energies are making the body tired. Must direct energies to recharge. Meaning, looking to the gigantic nucleus of pulsing light and dark right at the core of Super Brain, and sending forth power. Energy to the toes! Energy to the hands! Energy to the vital organs! Energy to the organs shriveling from lack of use. Super Brain must make the body more attractive to potential mates. (Troll nursing homes to find rich widows. Have to get them when they're new, before they've signed over the house.) Like spinach, Super Brain makes biceps anvils, hands hammers, dinghy tattoo on chest a battleship. Pipe is spinning, strident music playing, theme song. I'm a whirlwind of hitting objects with my fist and having them land in a more ordered arrangement. I'm strong to the finish.

Super Brain semi-drifts into a quiescent state, the body relaxes. Semi-drifts, because Super Brain continues forever his activity, now monitoring all things in a mighty way, crickets in the pantry, birds outside, and the air conditioner popping on again.

Must rouse myself and get on with my day.
Posted by dbkundalini at 1:12 PM