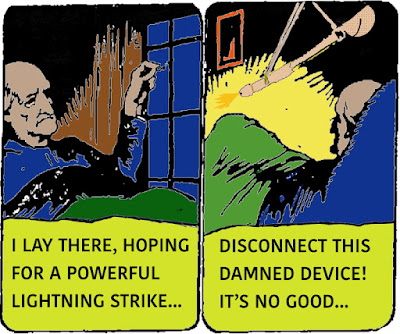 I remember a good joke from when I was a kid: “Were there any impotent men born in your town?” And the answer, “No, just little babies.” That puzzled me at the time, not knowing words and what they meant. So I ran it by my mom, who was always good at sugarcoating things, making them age-appropriate. “Mom, what’s an impotent man?” She frowned and said, “Someone who keeps to himself.”

That’s such a good answer, now that I’m basically impotent myself. In general, I keep to myself. I figure, Who am I anyway? Just another brick in the wall. Just another drop in the bucket. What’s the difference? And I love how she kept it on the innocent side. Because since then I’ve grown up and learned that there’s another meaning to impotent, and probably what she was hinting at with the ‘keeping to himself’ definition.

Still, ‘keeping to himself’ is a pretty good definition. He’s all sad sack, hang dog, long in the face and nowhere else. He’s got a couple dried up raisins lacking savor and flavor. Let’s say. Maybe he dreamt of deserts too much, vast spreads of sand and little else. Or maybe he worried about the humidity too much, kept the dehumidifier on, and now is all dried out. Which could be part of my problem. I’ve been running the dehumidifier constantly, and it looks like it caught up with me. You put a pot of stew on the back burner to keep it warm, pretty soon the stew’s gone and the pan's dry and crusty.

Naturally I’m going to keep to myself, not go out. When you’re impotent, what’s the point of catting around? You’re content to sit at home and watch C-SPAN, old school C-SPAN, not the interview shows, just the one-camera panning an empty Capitol building except for one lone filibusterer. I used to bust a few fillies, at least in my dreams. Now it’s only my eyes that are big as saucers, looking at this Republican wash-out, keeping to himself, impotent like me in every respect.

The great avatar of dried up men everywhere — although now 99% forgotten, fittingly — is the singer Yogi Yorgesson. He’s well-known for the Christmas record “Yingle Bells.” But it's his impotency song “All Pooped Out” I’m thinking of today. Back in his younger days he used "to give the girls the eye, now I only want another piece of pie." Once upon a time he used to “yump and shout,” now he dreams of pigs’ feet because he’s all pooped out. My mom used to buy pickled pigs feet, but I haven’t had any since; think I'll buy some.

So what’s my trouble with impotency? Good question. Mostly age, no doubt. They used to tell me, “Ahh, sonny, get out there and sow your wild oats!” This was the old guys at the barber shop. “'Cause one of these days you’ll be like me!” I’d look at him and not know what he meant. White hair? Needing assistance to his car? Something more? I didn’t know the facts of life. Now I know. He wasn’t put out to stud. He was put out to stood, as in was stood in the corner all alone. And loathing it.

But being impotent isn’t so bad, guys. I kind of like it. No more filthy lucre, as in I’m not even looking anymore. What’s the use, who cares? No more throwing pebbles at girls’ windows and hoping they’ll shimmy down the ladder I propped up. There’s no more shimmy, no propping up. No more sending flowers anonymously, then dropping hints of who might’ve sent them. The flow-er’s kaput, no more anonymess, the only thing dropping is the pp, and that’s a bare prickle. No more big testes, but quizzes still flow easily.

I have all kinds of time on my hands, folks. I mean, what else would I be holding? Just a ticking timepiece, the only piece I need, keeping track of my pathetic days, counting the seconds till the rest of me shrivels and fades away. Put me on a burning dingy and set me afloat; that’ll be the only dingy that hasn’t sunk hopelessly out of sight.
Posted by dbkundalini at 11:58 AM