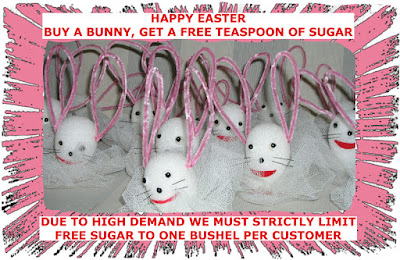 Money’s been tight chez Slump. But the Good Lord above keeps me in His thoughts. Right in the nick of time He scheduled Easter to occur. You never know when it's going to be, but it's always about the same time as the Easter craft sale at the shopping center. As if by design.

Tossing and turning one night, I had an idea to increase sales of my bunnies, based on something my grandma used to say, “Give Grandma a little sugar.” Kiss her cheek and everything was right with the world. Then there was Grandpa, who always told us sugar was the key to good commerce: “You can sell anything with sugar on it!”

But since they died, the world’s been wracked with diabetic fits; everyone I know except me gets them. The neighbor guy, he has diabetic fits so bad there's a special fence around his yard to set off an alarm if sugar is near. If he even hears of sugar in the neighborhood — picture a kid a mile away with a Kool-Aid stand — he goes to his 1950s fallout shelter. Authentically stocked in every way, old vaccines, canned meat, and pith helmets for his family, who by now are grown and moved away or dead.

Anyway, putting all the pieces together, and not sounding any alarms in the neighborhood, I did what would’ve been unthinkable in the old days — when craft sales were the universal craze and you had to beat the crowds back with threats of arrest and deportation — I sweetened the deal for customers. I bought several five-pound bags of sugar and was prepared to give away a spoonful of sugar with every bunny purchased.

I had to do something, because, face it, craft sales aren't what they used to be. They've more or less fallen into abject desuetude, am I right? While there’s still a few old dinosaurs like me trying to keep them going, basically it's no use. Why? Most of us blame the internet. Look at the evidence: You’d have to be pretty dumb not to realize you can make all the crafts you want right at home for a fraction of the price. The instructions for everything are right there. The only thing they can't fake is the deep love we dedicated crafters put into our product. Not one of my bunnies leaves me without knowing I'd never part with it for anything but money.

So I had the idea early yesterday: I would give away free sugar, a teaspoon of sugar with every sale. I tell you, it went great guns. I’d barely set up and a woman came over and was going nuts over the bunnies: “How cute! Have you named them? Where’d you ever get the idea?!” I figured she was toying with me, rubbing it in just before she set them down and vacated the premises. But, no, she was sincere and bought one! But it turned out she didn’t want the sugar. “Give mine to someone else.” She held her belly as if to say, either, “I’m still full from breakfast” or “This is where my diabetic demon dwells.”

To summarize the course of events. Right away, I sold around 15 bunnies and none of the ladies wanted the sugar! I thought it over: 1) More profits for me; 2) I can use the sugar myself; it’s found money; or, 3) I can use it as a promotion to get more people to my table. How best to do that? KIDS! I usually shoo kids away, since there’s no more natural thief or merchandise-breaker than a crummy kid. “Oh, we’re so innocent, we didn’t know the bunnies were for sale!” Or “They must be very poorly made to break so easily, I’m sure Johnny or Sally didn’t mean it! What have you got in them anyway, a quarter apiece?” Dadcrumb, sonofa buck'n, God! ... bless you...

So a kid gets within 10 feet of my table -- are you with me? -- and I'd call them over and get them admiring the bunnies. “Would you care for a free tablespoon of sugar?” This was like 20-25 kids, amazing since kids are more generally dumped by their parents at the arcade. And every kid wanted sugar! Which got me thinking back to my childhood ... If there was a scuzzy old man in the neighborhood giving away free sugar, we'd be there. We didn't care what he was up to.

The great thing about this is, It was a total success! Not only did moms come over and completely thank me for being such a generous goodhearted person for giving their kids free treats, they were buying bunnies to compensate me. More, more, more! Plus, it seemed that just having sugar at my table gave me a better reputation. You seem sweeter if you're seen with sugar! But what about giving sugar to kids without their mother’s permission? I believe it made them happier, since I assumed it'd be OK. And because I wasn’t putting pressure on them, trying to get them to buy a bunny in return. (I know my own parents would've appreciated all the free food anyone might randomly give us.) Which meant they bought bunnies out of their own free will, not as an expectation.

OK, let’s assume most of the kids will survive the sugar. I'm hoping for at least a 90% survival rate. Next year I’ll be giving away other loss leaders. Not just sugar, but sugary drinks, sugary candies, sugary cereal, whatever I can get my sweet little hands on! With a dish of prunes, let's say, just to be on the safe side, if diabetes rears its ugly head.