No Pure Place On Earth 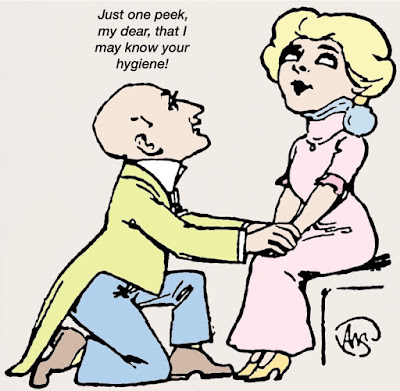 I’ve been doing some camping lately while they start working on my house (a complete gutting, fumigating, exterminating, re-boarding, paneling, shingling, from the ground up). Being away from the old place — with all the associated illnesses, allergies, and pure phobias that go along with vermin, their foulness and even the thought of them — had cleared my head, to the extent it can be.

Stepping out this morning, for example, I took a deep, very contented breath of morning air. Which, just when I’d done so, was spoiled when I looked over and saw a monster of some sort — perhaps a skunk, otter, or groundhog, etc. — moving its way from the outside air to the confined security of a culvert. Seriously, that’s one culvert I won’t get near! One, I don’t believe in disturbing the peace of another creature; two, yes, it disturbed my peace, but I chalked it up as unintentional.

It made me think what anyone in my position would think: You never know what’s going on around you, not fully. But we definitely share this world with all kinds of things, right under our feet, with no way of escape. As it is, ever since I saw Neil Shuban’s “Your Inner Fish” I know how these creatures and I are intimately related. We could sit in peace and break bread if somehow I could make them watch the same documentary and understand it. My brain, as it turns out, as feeble as it is compared to other human brains, is pretty sophisticated compared to the average creeping rodent.

I promptly put rodent-guy out of my mind as to any fear, let’s say, and thought of the impurity of the grass vis-a-vis piss and animal droppings, including my own dog’s, whom I was just taking for a walk for her morning bathroom break. Sure enough, she arches up and poops. Sure enough, she squats broadly and pees, all in the open, never thinking of it again, never caring.

Right away, though, I — much more self-conscious as to the impurity scale — pictured some irate trailer wife rushing over to complain, “You let your dog pee and poop right there?! Where people spread their blankets for picnics and family affairs?!” This didn’t happen, no one came out. But I had a retort ready, just in case. “Ma’am, may I instruct you in the ways of life? There is no pure place on earth that hasn't been defiled by the droppings of man or beast!” I would've gone on to add that if it wasn’t a defilement from the hind end, I’ve seen countless men and a few women spitting to beat the band.

My grandpa was the classic tobacco chewer and spitter. He even did the spitting-out-the-car-window thing, now something of a cliche, where it returns through the back window. Naturally a lot of his spit made it to the ground. So if you were going to have a picnic nearby you’d probably need not just a blanket but a tarp. I myself spit sunflower seed hulls, which bothers me not just for the unsanitary nature of spit but for DNA purposes. I’d hate to have an evil scientist cloning me, and frankly I'm not sure it hasn't already happened.

Anyway, right here as I camp, I’ve seen every kind of dropping from animals. There can’t be one square inch around here — of course the earth has been here since 4004 BC — that hasn’t been dumped on, drooled over or worse. And that's just the deer! No, you have to figure, this is the New World, and Adam and Eve didn’t travel far, but the animals were running riot. Pee parties on a presidential scale, enough scat to shame a Crothers.

But what about the Himalayas? Well, yes, there too. Since it was essentially the same level before continental drift thought of moving. And more recently, there’s all the backpackers, with plenty packed in their backside, and having to unload it somewhere. You ever seen the top of Everest? It’s so slick with offal that's the source of most fatal accidents. And they say you can’t breathe at those heights, that’s why.

Friends — fellow men and complaining ladies — there is no pure place on earth. Maybe there once was, but it’s long since been hopelessly defiled.